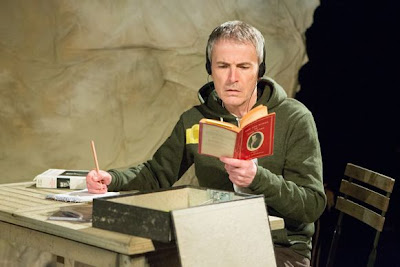 THE LONG LIFE AND GREAT GOOD FORTUNE OF JOHN CLARE

EasternAngles at the Quay Theatre Sudbury
26.03.13

Peasant poet John Clare was born and died in East Anglia, and its countryside inspired much of his work. Eastern Angles are touring this new play around that same region; I saw it in the Quay Theatre, Sudbury, which Clare would have known, had he encountered it on his travels, as part of a busy little port on the Stour.
There have been many words written about poor Clare. The myths and legends are alluded to in Tony Ramsay's piece, but its full title reminds us that, despite the demons and the blue devils,  the poet lived to see 70, and had many admirers and supporters throughout his career.
James Turner's simple design – based on Clare's Helpston cottage, where an early version of this piece premièred last year – has reeds and teazels, a garden shed, decking with table and chairs and the all-important hat-stand for the costume changes.
For the three actors play many parts, changing from Clare's time to ours in a twinkling.
First we meet John, making notes and consulting a well-thumbed, post-it punctuated binder, listening to Neil Diamond and reading the poems, – "I am …" the ingenious link here. He's joined by Melody, a psychiatrist, and it becomes evident that he has many of the symptoms of autism – he recites word for word not only verses but the pub listings for The Blue Bell and the Exeter Arms. Melody's partner, Rafe, is trying to pitch a drama-doc about the gypsy poet – there is conflict between "the shrink and the storyteller". John is convinced he is Clare – they share an all-pervading sense of loss - and the "thorned and narrow road" merges magically with the "scenes where man has never trod", as we move towards some understanding of these two troubled minds, and a final symbolic act which is one of the finest moments of theatre I've seen in a long while. To say more of the resolution of these two stories would spoil the suspense and the sense of discovery. You should see this fine piece of work for yourself – it's touring the region until May 18.
The performances are superb – almost unbearably moving in this intimate space. Richard Sandells is wonderful as poet and patient; they are not the same, their sufferings are not identical, but the one constantly illuminates the other. Louise Mai Newberry is Melody, as well as one of the "two wives", a society lady and a flower seller, while Henry Devas is the good doctor Skrimshire as well as the obstinate "Mr Zhang".
Ivan Cutting's direction is clear and uncluttered; he lets the words, and the actors, speak, and the mood is often light, the action and the emotion always compelling. And at the end of the two hours, you will certainly want to read more by, and about, John Clare, and maybe listen to more Neil Diamond …

Delighted to catch the show again in the slightly less evocative surroundings of the Cramphorn; the story of the "nineteenth century farmhand and poetic genius", born with a sense of loss, just as powerful. More keenly aware of the parallels within the structure - Mrs Emerson and Mrs Zhang, for instance. And the echoes of Curious Incident and Equus a little more insistent ...

I am, yet what I am none cares or knows
My friends forsake me like a memory lost
I am the self-consumer of my woes
They rise and vanish in oblivious host
Like shadows in love's frenzied, stifled throes
And yet I am, and live, like vapours tossed

Into the nothingness of scorn and noise
Into the living sea of waking dreams
Where there is neither sense of life or joys
But the vast shipwreck of my life's esteems;
Even the dearest, that I loved the best
Are strange - nay, rather stranger than the rest