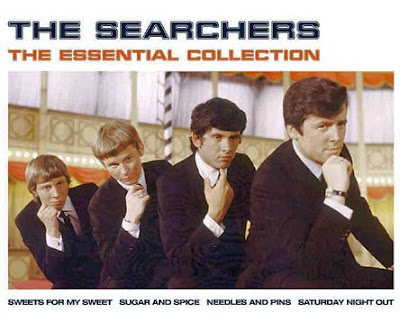 THE SEARCHERS
at the Civic Theatre, Chelmsford
20.03.13

How great to be able to relive your youth, recreating the soundtrack of the Sixties and sharing some memories along the way.
The audience had a good time, too, at the Searchers' sell-out return to the Civic, sandwiched between Australia and New Zealand.
The fans, who do a fair share of the work in this gig, are clearly familiar with every riff, every refrain. Just as well, since the decibels tend to dull the detail in the cosy Civic, even if you call it the "Chelmsford International Indoor Arena".
This is the Searchers' half-century year. John McNally, who goes back much further than that first '63 single, is still with the band, playing lead guitar and muttering wisecracks, an excellent stooge to Frank Allen, who's only been with them since '64, and did most of the sharp patter. The vocals were mostly left to Spencer James, a mere 27 years a Searcher.
This Mersey group were rated by the Fab Four, though of course they had no creative genius, and in fact stole most of their songs from others: we heard contributions from the Clovers, the Orions and the Drifters. A wry sense of mortality coloured the proceedings: amongst the shades invoked were Del Shannon and Roy Orbison, plus, in jest I think, Pearl Carr and Teddy Johnson, both thankfully still with us.
The evening finished with a number stolen from Gerry Marsden and Carousel, before a nostalgic megamix of Searchers hits – Sweets for My Sweet, Sugar and Spice, Needles and Pins …

Email ThisBlogThis!Share to TwitterShare to FacebookShare to Pinterest
Labels: Civic Theatre, THE SEARCHERS