TRELAWNY OF THE WELLS 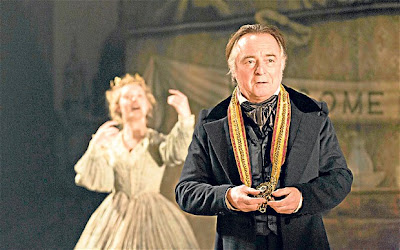 TRELAWNY OF THE WELLS
at the Donmar Warehouse
27.02.13
for The Public Reviews

If you're a successful young movie director seeking to make your mark on the legitimate stage, you'd struggle to find a more "theatrical" piece than Trelawny of the Wells.
Pinero's affectionate, and frequently very funny, look at luvvies and toffs in Victorian London has been tweaked for this revival by Patrick [Closer] Marber. It shows us a changing world, with realism set to replace melodrama and low comedy.
Is that the theatre cat on the chaise longue ? He'd feel at home in the Donmar, done up with footlights, oil lamps, real candles on the upright piano, and real boards for the stage of the "Bagnigge Wells".
The scene changes, enhanced by lovely period songs, are impressively and entertainingly handled, as is the delightful doubling [though not without one hastily concealed stage wait]. As we leave the Wells, and Cavendish Square, for the pioneering Pantheon, the drapes fall dramatically to reveal the unadorned warehouse wall.
Ironically, the broader characters come across better than the "more lifelike" ones. Amy Morgan makes a radiant Rose, with Joshua Silver as her tongue-tied suitor. Once the ornament of the Wells, Rose is going "on approval" to the Gowers, and the play begins with her farewell cold collation, when we are introduced to the world she is leaving. Mrs Mossop, the landlady, gloriously guyed by Ron Cook [who is also a superb Sir William], the Telfers, old ham and faded diva, played with some style by Peter Wight, who's also the Gowers' hunched butler, and the wonderful Maggie Steed, a definitive Great Aunt Trafalgar in later scenes.
Here's Susannah Fielding, making much of Miss Parrott, erstwhile Undine, and now playing in more exalted circles, Colpoys the Clown [Fergal McElherron], a tearful Avonia Bunn [Aimée Ffion-Edwards] and Gadd the precious romantic lead [Daniel Mays]. Jamie Beamish gives a diverting trio of characters, including the demented Stage Manager O'Dwyer, and Daniel Kaluuya brings a quiet sincerity to Wrench, tired of being cast in rotten parts, who will go on to write his new drama, drawn from life.
Joe Wright's visually stunning production – with movement by Marcello Magni – works best in the set pieces: the farewell speeches, the rubber of whist, the thunderstorm as Rose's worlds collide, the stage brawl. Less so in the long introductory stuff, and in the rehearsals for Wrench's masterwork. But the spirit of the piece, and the age it evokes, are ably captured in the intimacy of the Donmar. Particularly moving, perhaps, is Cook's Damascus moment, as the desiccated Vice Chancellor suddenly softens at the name of Edmund Kean, Richard III of blessed memory.

This production is supported by the Stuart and Hilary Williams Charitable Foundation, and by the Donmar company's Principal Sponsor Barclays.

Email ThisBlogThis!Share to TwitterShare to FacebookShare to Pinterest
Labels: donmar warehouse, TRELAWNY OF THE WELLS