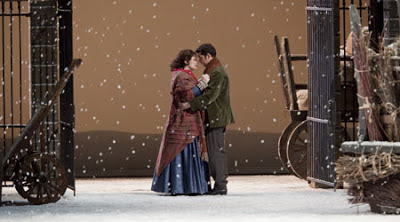 Why is John Copley's atmospheric Boheme still in the repertoire some forty years after it was created ? Could it be that, with Julia Trevelyan's sumptuous design, it is in many ways a definitive, if traditionalist take on Puccini's classic weepy ?

A packed March matinée certainly loved it. We had a good, if not stellar, cast. Anita Hartig, making her ROH début, was a wonderfully convincing Mimi, frail, vulnerable, but with a creamy, silky soprano which complemented the steely tenor of Rodolfo Teodor Ilincai. No stranger to this role [he appears on the DVD on sale in the interval] he makes a sprightly young student, singing with power and panache whether seated, standing or supine.

Musetta, striking in orange against the subdued colours of the students, was seductively sung by Sonya Yoncheva, and Marco Vinco, as Colline, made a touching farewell to his coat in Act IV.
Nicely rendered by Kenneth Chalmers' surtitles: “poets and philosophers passed through your peaceful pockets”.

The staging was unfussy but often eloquent and entertaining. The impressionist snowy morning in the Inn Yard, the split level garret for artist, musician, philosopher and poet, and the Café Momus, with its sommelier, its billiard table and the busy boulevard outside. This second act, with all its bustle and incident, was staged with a sure touch and masterly focus; Act IV, with its lively physical opening and its sombre, tragic ending, was a superb blend of music and drama.

Alexander Joel conducted with obvious enthusiasm, without a score, and brought the best out of the orchestra. Puccini seems to use all his melodic fire power in the first half hour, with familiar arias and duets jostling each other. But then those themes return to haunt their singers, and to remind us of happier days before the heartbreak.