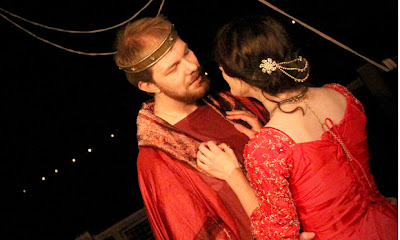 Kit Marlowe knew the Rose well, though he would have been as surprised as anyone to see the actors' breath hang in the chilly Easter air, the audience wrapped in blue woollen blankets.
First performed by the Children of the Chapel Royal, and written in collaboration with Thomas Nashe, this early Marlowe tells a familiar tale – the love affair between Libyan Queen and Trojan Hero.
House on the Hill brought us a traditional take on this neglected text – spoken with exemplary clarity, using the resonance of the vast excavation, even if the accents were a little posh – more Kensington than Carthage.
The setting was inevitably simple, with countless candles replacing the red neon ropelights, and a cats' cradle of cords above the cramped arena. The shallow lake was effectively used, with one scene played out on the farther shore.
Some noteworthy performances from a young cast, directed with pace and precision by Alex Pearson and Jeremy Smith. Rhiannon Sommers was a very watchable Dido, sympathetically drawn by Marlowe, transformed by Cupid's dart from proud Queen to infatuated teenager. Her increasingly desperate farewells to Aeneas – flirtatious, frantic, fearful – were excellently handled, as was her death, falling backwards into the silken fire.
Her sister Anna, thwarted in her secret love for Edward Walters' Iarbas, was passionately played by Julia Taylor. Natasha Percival was the Puckish Cupid, and there was an impressive double from Samantha Spurgin as the aged Nurse and the voluptuous Venus – the opening scenes show how the Gods use mortals for their sport.
James Burgess was a confident Aeneas, relating the "woeful tale" of the fall of Troy and wrestling with his conscience, torn between Libya and Italy. His faithful Achates – doubling Jupiter in the opening – was Carsten Garbode.
A welcome chance to see this rare Marlowe in this uniquely evocative setting.
on Sunday, March 31, 2013