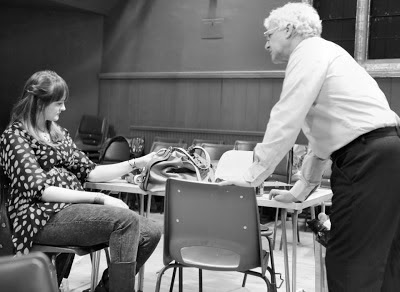 Historic child abuse is one of the big stories of 2013. But David Harrower's compelling drama is a world away from high-profile television stars and music teachers.
We are in a soul-less staff room on an industrial estate, beautifully realised in the convincing set design. Into this harsh neon hell comes Una, to confront Ray, whom she last saw fifteen years ago when she was twelve. There are things he has to know, things she has to understand.
In this powerful production, directed by Mike and Sara Nower, the audience is, sometimes uncomfortably, a fly on the wall, as these strangers relive their little secret, sharing it all over again in a different squalor, in another distant town. Hard to watch, hard to look away as the carapace that enables them to live their lives is stripped mercilessly away.
Two very impressive performances from Richard Baylis, nervous, defeated, clinging insecurely to his new life, and Kat Hempstead, cooler at first, but intensely moving later, remembering her shameless, stupid crush and the death of her father.
Their uneasy dialogue, inarticulate, impassioned, is well caught, with telling moments of silence and stillness, though I might have traded some detail for an even more naturalistic overlap. This huge impersonal space has little sense of claustrophobia, but the ending is superbly realised: he must flee to his uncertain future, she has failed, despite feverish promiscuity, to find love with anyone else, and is condemned to stay imprisoned in her past.
But what if they had escaped the slippery slope from barbecue to park to seedy B&B, before the senseless elopement to the ferry port. Say her parents never knew, the police were never involved. Would she now be seeking redress and retribution from "Peter", her historic abuser ? Or would she still try to rekindle the love affair, rewrite the sad story of lives blighted ?
on Friday, March 15, 2013