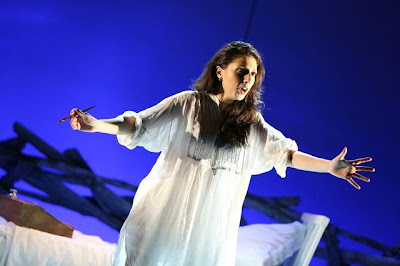 Tchaikovsky was insistent that his opera should be performed by students at the Conservatoire, so it was a fitting, if ambitious, choice for the post-graduate students of Royal Academy Opera.
Refreshing to have to make allowances for youth rather than 'maturity' amongst these fine soloists, and, after Holten's very personal take at the ROH, nice to see this traditional production by John Ramster, set in the Russia of Pushkin's poem.

Sung in Russian, with an international cast, a largish orchestra and Jane Glover in the pit, this was no half-hearted affair.

Adrian Linford's design was simple, with large picture-frame upstage, and a strange flying fence to represent the countryside.

The chorus was a powerful force, singing with character and clarity, and managing some fine dance-steps, too, on this restricted stage: folk, waltz, polonaise, all executed with charm and panache [choreography by Victoria Newlyn].

This is Onegin's opera, and it is his downfall that provides the tragedy, as his life is ruined by a rash duel – a downfall well suggested by Ross Ramgobin, whose strong baritone was a delight throughout the piece. But it is Tatyana's story, and we were privileged to see a superb incarnation of the role by Tereza Gevorgyan. A proud aristocrat in the final scenes, but a credible love-sick teenager at the start. The demanding letter scene was stunningly crafted, helped by the white linen staging, though I could have done without the purple dream at the end, in which she gives herself to Onegin, standing rather awkwardly at the foot of her bed.

Stephen Aviss's romantic Lensky had a pleasant tenor, and an expressive face. His soliloquy before the duel, and the duet with Ramgobin which followed it, were among the dramatic highlights of the piece.

Outstanding work in smaller roles from Stuart Jackson as an imposing Pierrot Triquet, and from Rozanna Madylus as Filipievna, totally convincing both dramatically and vocally.

Enthusiastic, confident work from a large cast, well supported by the Royal Academy Sinfonia. We have certainly not heard the last of some of these new recruits to the lyric stage, and it was a privilege to share this impressive showcase with them.
on Saturday, March 16, 2013