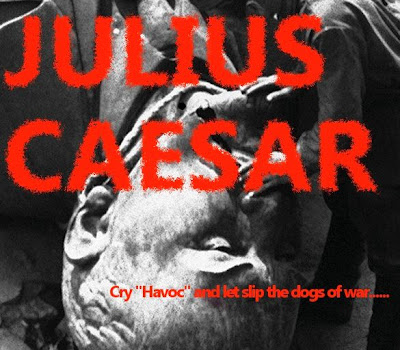 Glenda Abbott's energetic Julius Caesar was notable for its clear narrative line, its impressive verse speaking and the tragic sweep of the action.
The pace was well maintained, save for some slack moments amongst the idle creatures of the mob. The setting was modern, which helped us to get closer to the human beings around whom the plot revolves, as well as giving an immediacy to the later, military scenes, where Philippi could have been Libya.
Outstanding performances from Brutus [Matt Jones] – his night-time soliloquy and the death of Portia particularly moving – and Mark Antony [Lionel Bishop] – his first entrance striking, the Cry Havoc speech carefully crafted, his oratory plausible.
Among the other roles, Alan Ablewhite made a noble Cassius, Charles Eveleigh an excellent "peevish schoolboy" Octavius, and Vernon Keeble-Watson a demotic "honest Casca". Caesar himself was given weight and gravitas by Sydney Hill. Not much for the women here, but the other Cinna was Rhiann Hillier, Lindsey Crutchett was a convincing political wife, and Vikki Pead was a striking Portia.
The setting was stark, with Coalition-coloured satin for the upper levels [though the pulpit speeches were wisely rooted in the action]; the music ranged widely, with AC/DC's Hail Caesar an inspired choice.