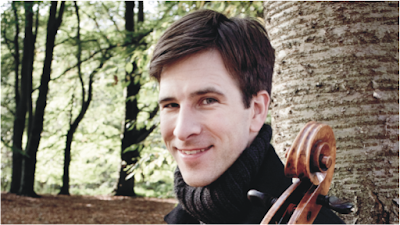 The last M&G of this season, and a chance to hear the remarkable young cellist Guy Johnston in the Haydn Concert.
Elegant and exciting, his playing had plenty of heart; the subtly lyrical cantabile of the central Adagio was particularly impressive. His 1714 cello, by Rome maker David Tecchler, also acknowledged the warm applause.
After the interval, he played Bridge of Sighs, by Tim Watts – an atmospheric evocation of the restless canal beneath, with a nod to Monteverdi, premièred by this orchestra in 2013.
The concert began with sweeping string sounds of Respighi's Ancient Airs and Dances, and ended with the unfailingly popular Fortieth Symphony of Mozart; after the subdued palette of the Watts, an athletic, extrovert rendering by this excellent chamber orchestra, directed from the violin by Eva Stegeman.
Another superb season of Civic Concerts, made possible by the fruitful collaboration between Orchestras Live and M&G Investments.
on Monday, May 04, 2015