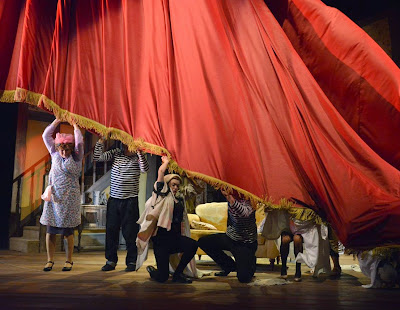 at the Mercury Theatre

for The Public Reviews
Doors and trousers, boxes and sardines. The very essence of farce distilled in “Nothing On”, Robin Housemonger's classic from the early 70s.
Michael Frayn's no less acclaimed tribute to the genre shows us the action on opening night [The Grand, Weston-super-Mare], then from backstage at an Ashton-under-Lyne matinée, one month into the run, and finally, on its last legs, in Stockton-on-Tees, or was it the Old Fishmarket Theatre in Lowestoft ?
The company of eight, plus their director, struggle not only with the demands of the show – props, cues, entrances, exits – but also with their tangled private lives, the jealousies and the mutual loathings that spill out onto the stage.
Daniel Buckroyd's production skilfully builds the chaos and confusion, working up to the Act III climax that sees the curtain fall on the exhausted cast.
There is much physical fun on offer – the stairs, the doors, the telephone – but some fine character studies too. David Shelley excels as the earnest but dim Freddie, forever seeking motivation from harassed director Lloyd [Hywel Simons], who has woman trouble of his own, and would clearly rather be in Aberystwyth with Richard Crookback. Sarah Jayne Dunn looks stunning as the myopic airhead Brooke, and Louise Kempton makes a very convincing ASM, a tearful scapegoat for each fresh disaster. Dan Cohen is the company manager, who manages to go on as two different characters in the final act, and Peter Ellis plays the elusive Selsdon, a great Shakespearean reduced to character parts and driven to drink, wandering off stage to get his line.
Especially enjoyable as they become more and more fraught, Louis Tamone as Garry Lejeune, a slick farceur on stage, lost for words off, and Sara Crowe, her brave, clipped tones masking the turmoil within.
Dotty Otley, the housekeeper and mistress of the sardines, is given a fine double characterization by Louise Jameson – finding it all too much after twelve weeks on the road, she goes through the motions with bemused resignation.

The converted posset mill is wonderfully realised in Dawn Allsopp's design – an archetypal touring set, with red warmers on the tabs and light music on the tannoy. And there's a nicely spoofed Otstar Productions programme to enjoy during the scene change.

The first act, where Frayn is establishing his characters and setting up the play with the play, is a little slow, and only fitfully amusing, but there are many wonderful, laugh-aloud moments after the interval when things begin to unravel, as well as some subtler pleasures: the collective relaxation once the show is underway, the passing mention of an understudy run – surely an opportunity missed for a fourth helping of Housemonger.

Email ThisBlogThis!Share to TwitterShare to FacebookShare to Pinterest
Labels: colchester mercury, made in colchester, NOISES OFF