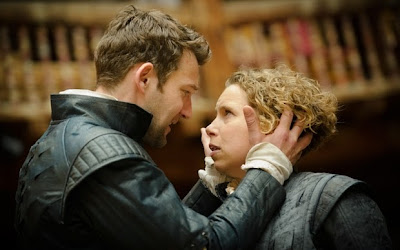 
Shakespeare's quirky romantic comedy poses more questions than it answers – hence the title, perhaps.
Blanche McIntyre's production is sumptuously dressed; there is no set – no forest, either – simply discreet banners to suggest a change of focus.
The stage is considerably extended, encouraging the actors to engage with the audience, and enabling Jaques and Touchstone to lob witty observations over the heads of the groundlings. They're both excellent, the philosophers: Daniel Crossley's Touchstone literally laid back with his cool shades, James Garnon mastering the space as the melancholy Jaques, giving a cynical Seven Ages with an apple in his hand. [Though not, like Michael Bryant back in 79 at the NT, munching it throughout.]
Some others seem underpowered – Orlando and the Dukes – but there is excellent comedy from the two shepherdesses [Gwyneth Keyworth's Phebe and Sophia Nomvete's Audrey] and from Patrick Driver as Corin, a very Shepherd's Bush rustic.
Michelle Terry as Rosalind and Ellie Piercy as Celia work together brilliantly as the cousins – Terry, a consummate Shakespearean for the 21st century, is “a busy actor”, with unlimited physical energy, but knows the value of stillness, too - “my father was no traitor”. They are no mere spectators at the wrestling match, either …
The production seems a little long, at over three hours. It starts, like this season's King John, with a funeral, but includes plenty of fun along the way: anachronistic props – the tandem for the “two gypsies on a horse”, Martext's shopping trolley, Ganymede's map of Arden – and a great song and dance number for the Lover and His Lass.
And it ends, of course, with a lively jig, and Rosalind's epilogue, in which she reveals the boy beneath: “If I were a woman ...”
on Sunday, May 24, 2015

I'd be grateful if someone could explain the funeral to me please - the situation is amply explained in the text and it just adds to the length of the performance without, for me, adding anything else. Appropriate for Henry V and VI and King John, but not here. Otherwise a wonderful performance.