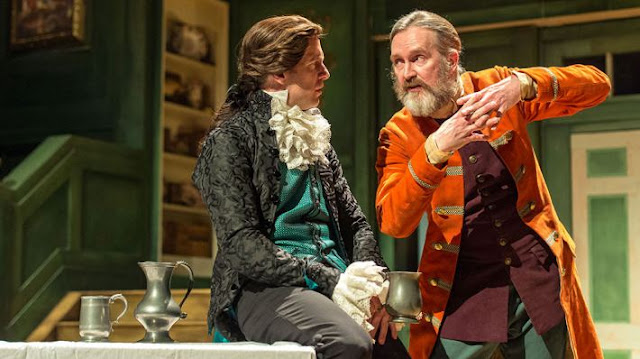 
Farquhar's carnal comedy comes to the vast Olivier stage, nicely filled by a versatile three-storey house [Lizzie Clachan designed] which morphs before our eyes from Boniface's inn to the Bountiful household, as oil lamps flying out pass chandeliers flying in.
Michael Bruce's music is splendid, too. Folk inspired and lively, especially in the “Trifle” song and dance number, and the French chanson, complete with accordeon. Musicians step out of doorways to accompany; the show begins with a lone fiddler at the top of the house, and ends that way too, when she is joined on stage by the whole band and the acting company for a joyful jig.
Simon Godwin's production eschews overly stylish Restoration mannerism for a more naturalistic feel: Susannah Fielding's resourceful Mrs Sullen has a feminist streak; she's well supported by Pippa Bennett-Warner as her sister-in-law sidekick. The two “brothers in iniquity” are Geoffrey Streatfield and Sam Barnett. Great comedy performances too from Jane Booker as Lady Bountiful, Richard Henders as her sullen, silent sot of a son, and Pearce Quigley as a deliciously deadpan Scrub.


It's a complex piece, but the pace is excellent and the narrative is driven along at a cracking pace, especially in the last act, when bandits, marriage, divorce, and a helpful inheritance come hard on each other's heels.
on Thursday, May 28, 2015