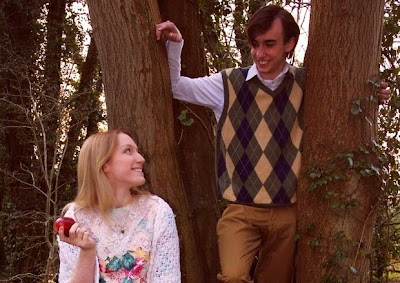 
Laurie Lee's elegiac account of his Gloucestershire boyhood, adapted with affectionate fidelity by James Roose Evans, is brought to the Quay by an excellent ensemble.
Directed by Neil Arbon, the company people the little stage with the extended family and village community. A rustic cart brings Mrs Lee and her brood to Bank Cottages – the same carrier's cart carries her simple deal coffin to the graveyard. Furniture is hauled on and off, carefully rearranged. Subtle lighting [Tim Foster] suggests the passing seasons.
In this version, much of the poetry, and the story, is entrusted to the narrator, an older Laurie looking back some forty years. Peter Drew is a compelling presence, bringing the words to life with a gentle passion. His younger self, the boy Loll who starts school, discovers the seaside, sings carols and tastes paradise under the hay wagon, is excellently done by Matthew Byham, equally convincing as the unwilling infant and the innocent who succumbs to the sweet charms of Rosie Burdock. His mother, recalling her days downstairs in the big house, almost missing the bus, collecting china, is Sarah Harvey-Wade, eloquently suggesting the stress of the single parent and her unconditional love for her family, and her husband long disappeared.
Strong support from a huge cast: Sarah Byham, Emma Hewett and Sadie Belsey as the girls, Alex Ray a sparkling presence as little Tony, Linda Dowdall as Granny Trill, combing her bits and consulting Old Moore, Denis Brogan in four fine cameos. And many more.
Sometimes the action might be more fluid – getting off the charabanc at Weston, for instance – and the noisy chairs sometimes threaten to drown out the narration. But there are many memorable scenes – Laurie whistling to bring the company on at the start, with Tony bursting out beaming from behind his mother's skirts – the huddle of carol singers, the girls having their hair done while the boys are in bed, the Babylon moments, the soliloquy with the schoolroom behind, and the moving ending, with young Loll picking up the roses, about to become the poet who has been leading us through his early life. There they are, in the line-up, with Lee's spirit also kept alive by the solemn young fiddler who accompanies the curtain calls.


And in the interval, the lads and lasses from Slad were pressed into service to hand round the food – savoury tarts, sausage rolls, and, less commonly found in the Cotswolds a century ago, delicious parmesan baskets ...
on Thursday, May 14, 2015