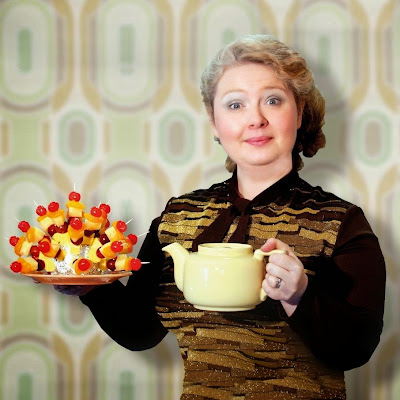 
Old friends, shared memories. They meet up, in this classic comedy, to support Colin, who moved out of the locality, met Carol, popped the question, but then lost her to a freak drowning accident.
They're gathered in Di's lounge, the epitome of 70s style. It becomes clear that there are tensions amongst the old crowd, and cheery, upbeat Colin, when he arrives, is clearly the happiest of them all despite his loss.
Michael Cabot's polished touring revival brings out the weaknesses in all six characters. Ashley Cook is the annoyingly positive Colin; Kevin Drury the sour, unfaithful husband of Diana, whose valiant efforts to put on a brave face for Colin's sake are at the heart of the drama. She's played with wonderful depth and humanity by Catherine Harvey – the polar opposite of Kathryn Ritchie's rudely laconic Evelyn. She's married to John [John Dorney], insecure, restless, squirming at any mention of death.Warm-hearted, foot-in-mouth Marge is amusingly done by Alice Selwyn, with excellent comic timing.
The excruciating awkwardness of it all, the wrecked relationships and the domestic disquiet, make for two hours of delightfully uncomfortable entertainment.