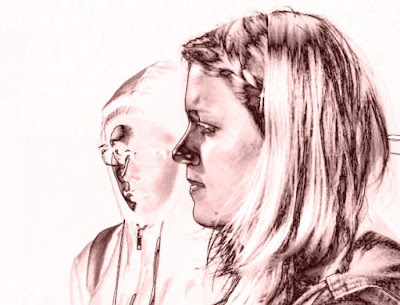 EARTHQUAKES IN LONDON
Chelmsford Theatre Workshop at The Old Court
28.05.2015

Mike Bartlett's climate-change drama has big themes and a huge cast. It's an ambitious, thought-provoking piece of theatre which makes significant demands on any company bold enough to put it on stage.
CTW is at the top of its game in this production, directed by Danny Segeth with Vikki Pead. The performance space is remodelled to provide intimacy as well as epic scale, with two levels linked by a central staircase. In harmony with the eco message, everything used is recycled, and the live music [MD Cameron Price] is acoustic, organically integrated into the action.
The play explores the imminent crises of global warming and population explosion, through the eyes and the words of three generations. The time shifts from the sixties to a distant, dystopian future.
A big stretch technically, with so many areas to light, plus the band, and a screen to assist with narrative clarity.
Twelve excellent actors take on dozens of roles. Some, it is true, find their characters more successfully than others, but every one of them gives an impressively confident and truthful performance.
Laura Bradley plays the Liberty's girl as well as the old lady on Hampstead Heath, looking back to the days before Dunkirk as she awaits the gathering storm. Georgie Whittaker has an intriguing dual life as an autistic schoolboy whose role is dramatically redefined in one of several heart-stopping moments. Stefan Stuart is the impassioned protester Tom; Joe Kennedy a hopeless husband in a mid-life crisis.
The scientist who sells out to Robin Winder's polluting dollar is superbly done by James Christie. Naive and idealistic in his younger years, truculent and guilt-ridden in his sixties, it is an impeccably sustained, riveting performance, nicely offset by Helen Quigley as his long-suffering housekeeper. His three very different daughters, abandoned when their mother dies, are Evie Taylor, outstanding as an all too believable politician, Laura Hill as the troubled, and troublesome, wild child and Ruth Westbrook giving a searingly sincere performance in the pivotal role of Freya, the middle sister who's pregnant with the next generation, but feels overwhelmingly inadequate, to the despair of her husband [Ryan Read-Gatterell].
Secure versatility from Kelly McGibney and newcomer Tom Tull as, amongst others, the minister's PA, an aviophobic businessman and a polar bear.
It's a long show, and occasionally words are lost to pace and naturalism, but a seamless succession of short scenes sustains the impetus, and the intimate encounters are contrasted with some superlative physical ensembles.

Image from an original photograph by Tom Tull
on Friday, May 29, 2015