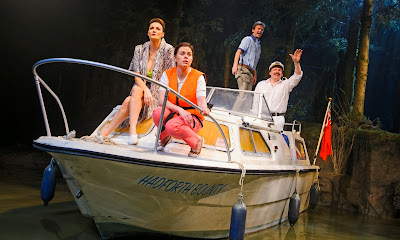 
Buoyed up, maybe, by the success of Neville's Island – real trees, real island with water deep enough to drown in – Chichester have boldly ventured Way Upstream with Ayckbourn.
Not his best play, remembered chiefly for the water tank which caused the National Theatre so much trouble back in '82. Like Ayckbourn's oeuvre, it starts as a domestic comedy of manners, and ends up as something much darker – and not merely dark, but unrelentingly nasty.
But if it must be refloated, it's hard to imagine it done better than here in the CFT, directed by Nadia Fall. There's an excellent cast, and an incredibly ambitious staging, designed by Ben Stones, with a real Hadforth Bounty moving convincingly around the river, a great forest behind as a backdrop, and retractable riverbanks on either side.
It's set in those distant 80s, so no mobiles, and colleagues address each other as Mr and Mrs. On the cassette player, Bach, James Last, and after the final collapse of civilization, William Byrd for brass. The shadows on the cabin blinds – we never see inside the “floating rabbit hutch” - the fight in the water, the bridges and the rainstorm, all superbly done. Even the strangely surreal ending, in which the only two likeable characters are pursued beyond the limit of navigation to start a new life post Armageddon, is successfully handled.
They are Jill Halfpenny as Emma, and Jason Hughes as hopeless Alistair, the worm who finally turns and brains his tormentor with a can of beans.
This is Jason Durr's Vince, the knight in shining armour turned cuckoo in the nest, a “victim of the system” whose veneer of charm soon wears off to reveal the bully beneath.
Peter Forbes is hilarious as Keith, all bluster and pomposity as the skipper; Sarah Parish is priceless as his less than enthusiastic wife, sunbathing on the tiny deck, flirting with Vince and making a complete fool of herself in an ill-advised drunken reprise of her youthful stage persona.
One simple idea is surprisingly effective amid the technology and the heavy symbolism: between scenes, the actors fast forward in sharp, jerky movements as the music track distorts.