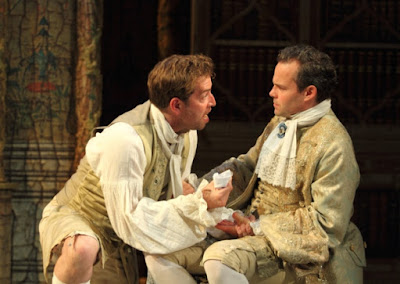 THE REHEARSAL
Chichester Festival Theatre in the Minerva
29.05.2015

Dust sheets shroud the château, autumn leaves enhance the sense of melancholy.
The Count [Jamie Glover], Tiger to his friends, and arbiter of taste, knows how to throw an elegant party, and he's set on staging an amateur Marivaux - La Double Inconstance – to amuse his guests. Roped in to this “worthless world of taffeta and treachery” are his closest friend, his wife, his mistress, his wife's lover, his lawyer and the young governess to the dozen assorted orphans who, inexplicably, inhabit a distant wing.
Anouilh's witty but ultimately depressing piece dates from 1950. Chichester, typically, excel at capturing the period feel, in a stylish production directed by Jeremy Sams, whose translation this is, and designed by William Dudley. The painted scenery, and the undercurrents of mistrust and malevolence, are gradually revealed as the Marivaux characters meld with the modern-day actors. The cigarette, the telephone brutally remind us that we're no longer in the age of elegance.
A superb cast – Niamh Cusack as the Countess, Katherine Kingsley as Hortensia, Tiger's mistress, Gabrielle Dempsey as the mousy governess Lucile. And, in a compelling performance, Edward Bennett is outstanding as Hero, the dypsomaniac, self-pitying guest who “likes breaking things” and whose ultimately tragic melancholy overshadows the second act. His two-handed scene with Lucile is masterly
A witty, elegant period piece, full of civilized scheming and bitchery, with potent subtexts and resonances.
on Sunday, May 31, 2015