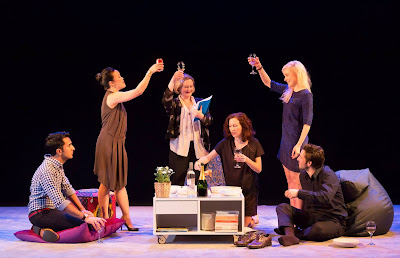 
Hedge funds, a gym-slip baby, neuroscience, the power of coincidence, the politics of academia.
That's a lot to pack into 100 minutes, and we haven't really looked at the Hard Problem: Cartesian dualism, consciousness, the mind/body conundrum.
I'm not sure I could have attributed it to Stoppard if I hadn't known. And what if it had landed anonymously on Nick Hytner's desk …
Of course Stoppard has previous as far as philosophy is concerned. Jumpers, for one, and, my favourite, Professional Foul, the television film where philosophers mingle with footballers. Pure philosophy gets a bit of a bashing in this latest play, and those of us expecting intellectual showmanship of the calibre of those classics will be disappointed.
One difficulty is that not many of the characters are sympathetic, nor do they seem to be drawn from life. Is that the writing, the casting or the direction ? A professor whose idiom includes “one feels” is not likely to say “haitch” for H. The wittiest thing in Hytner's production is the Venetian bed.
The dialogue often seems like a long tick-list. Teleology, Basel rules, altruism, game theory, the brain worm [Dicrocoelium dendriticum ], Godel's proof, the Prisoner's Dilemma … Characters often end up explaining stuff their listeners must already know. There's a Pilates instructor to ask the really basic questions.
Use of Pilates signals a certain laziness, perhaps. Loughborough University, too.
But there is much to enjoy, and a feast of food for thought. Together with all the ideas, there are human stories too, for Vera Chuk's sensitively drawn Bo, and for the central character, Hilary, played by Olivia Vinall.
She is picked from the slush pile to join the prestigious and amply funded Kroll Institute, though hardly seems qualified. In Vinall's performance she is touchingly vulnerable [miracle, coincidence and fireworks in her personal journey], but fails to convince as the academic – she simply sounds like an actor.
The frequent scene changes are covered by solo piano Bach – that most intellectual of musical forms – while above the stage a huge hard-wired neuron installation glows and flashes, the mind/body problem made kinetic.
A witty, clever piece, with enough twists and treats to keep us entertained. But not vintage Stoppard. If you want that, go back to Arcadia. Or for a brilliant account of Philosophy of Mind in a fictional, well-funded department, try David Lodge's “Thinks ...”, now a play as well as a novel.
on Thursday, May 28, 2015