THE HAUNTING OF HILL HOUSE 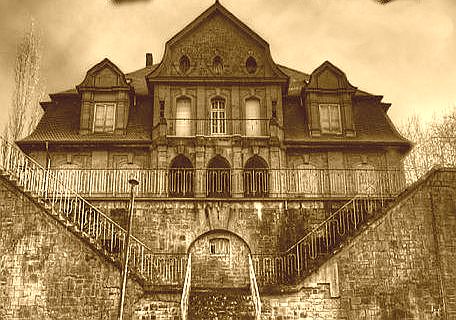 THE HAUNTING OF HILL HOUSE
Chelmsford Theatre Workshop at The Old Court
28.10.2014

Cleverly placed for Halloween, this theatrical horror story successfully attracts those seeking thrills and chills in the Old Court stalls. There's spookily dim lighting in the foyer, and the auditorium is swathed in sombre gauze.
The play itself is adapted from Shirley Jackson's best-seller by F Andrew Leslie [though neither gets a credit in the programme]. Director Jacob Burtenshaw has thrown in a few twists of his own, too, sexing up the show with shocks and spectres, guignol and eerie laughter.
It's a weird story of “murder, scandal, insanity and suicide”: a “man of science”, addressed as “Doctor”, arrives at Hill House to investigate psychic phenomena, bringing three susceptible guests to help him. He begins by reading, deadpan, from his report, but soon starts talking such utter balderdash - “some houses are born bad” - that it's hard to imagine which seat of learning could have given him that PhD. Worse, his batty wife and her “friend”, headmaster of a prep school, turn up with their planchette to throw a spanner in the ghost-hunter's works.
CTW's production is redeemed by two things: excellent actors, and some really scary moments; as with last month's chiller, The Birds, it is the unseen which is most unsettling – terrifying knocking on the doors, an effective blend of live sound and recorded effects. I liked the use of torches to accentuate the darkness. The set, too, is nicely realised – the dolls, the crucifix, the doors and the oxblood leather sofa, which quite possibly has its own agent ...
Leading the cast, Joe Kennedy as Montague, and Laura Bradley giving a terrific performance as the shy, dowdy Eleanor, who is drawn into the aura of the house with tragic consequences.
Strong support from the others, notably Caroline Webb as the Housekeeper, stroking her keys with manic malevolence, Regan Tibbenham, a total contrast as the other girl in the house, and Britt Verstappen as Eleanor's spectral alter ego.
on Wednesday, October 29, 2014

Email ThisBlogThis!Share to TwitterShare to FacebookShare to Pinterest
Labels: chelmsford theatre workshop, THE HAUNTING OF HILL HOUSE, the old court