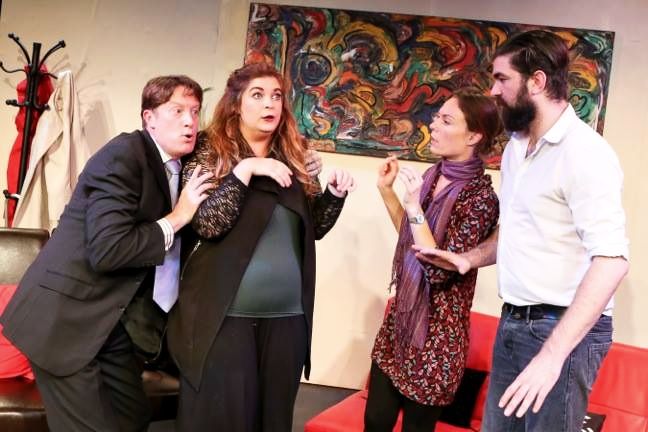 
"How many parents standing up for their children become infantile themselves ..."
That's God of Carnage in a single, slightly awkward, sentence. The kids involved can have no idea what their lunchtime scrap has started, as rational reconciliation slowly degenerates into drunken name-calling, the carpet strewn with clafoutis crumbs and gladioli as Dylan's lyrics add an ironic coda.
Christine Davidson's hilarious production shifts the action from Paris, not to New York, but to London. The métro aérien becomes the District Line, though the Picardy pudding, sadly, hasn't morphed into Dorset Apple Cake.
In Kerry King's stylish, simple set, dominated by an aggressively abstract artwork, the four parents make small talk, exchange recriminations, shout, weep and feel sorry for themselves.
A quartet of accomplished actors bring the protagonists amusingly to life. The home team – confident, relaxed, well-heeled but arty Guardian types, are an impressively hirsute Patrick Willis, and Eleanor Kent-Dyson, outstanding as the assertive Veronica. Less complicated pleasures from the performances, by Jeremy Battersby and Catherine Bailey, of visitors Alan and Annette, nicely contrasted at the start, ill at ease in their sombre attire. He's a corporate lawyer, a slave to his smart phone, demolishing the dessert and timing every laugh line to perfection. She's in wealth management, apparently [although she might be a phoney]. The evening goes particularly pear-shaped for her: she pukes spectacularly over the collectable Kokoschka, and gets creatively rat-arsed as she necks Michael's Santa Rosa rum.
I've said before that I regret that Reza's work is known in the anglophone world in Christopher Hampton's versions. The tone and the language sit uneasily in English. I'm pleased that "a former marriage" has gone; other literalisms I would have spent more time re-casting include "everything's in order" and "fallen out of the sky". "He did well to hit him" is not the same as "He did right to hit him". And we don't say "The Educational System".
But wherever it's set, however it's played, God of Carnage remains an intriguing, compellingly entertaining drama. As allegiances shift, new alliances form, the stakes are raised and violence escalates, we seem to be witnessing a mad metaphor for war and the breakdown of civilization.
on Monday, October 06, 2014