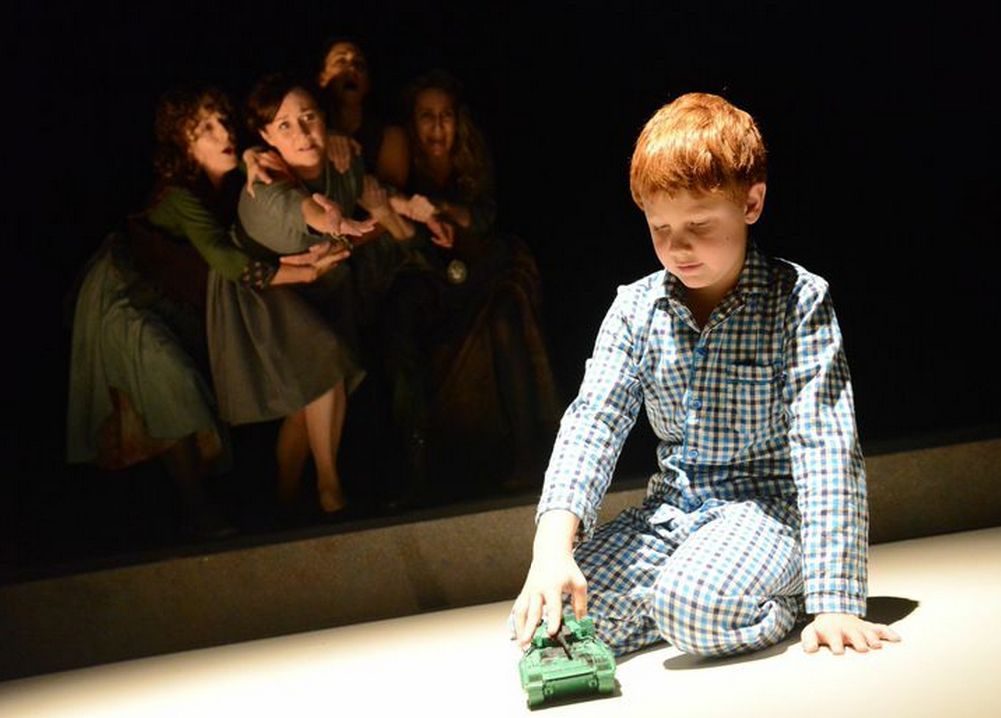 MACBETH
Made in Colchester at the Mercury Theatre
07.10.2014
for The Public Reviews

At first glance, a typical look at Macbeth our contemporary. Naked political ambition, red berets and body armour.
But Daniel Buckroyd's accessible production, his sixth since he took the helm at the Mercury, has unique strengths.
The staging is uncluttered but eloquent. Juliet Shillingford's design has a gloomy blasted heath as its backdrop – could be the devastation of the Somme – and inclined planes for the action. The palace is simple banners, with double-headed eagle, the castles fly in, only the heavy steel door is substantial. The lower level is tellingly used to separate actors from the story – Duncan's heirs, or the cut-throats. Blood is often the only colour in a dark, monochrome world.
The soliloquies, key to the complex characters of the tragedy, are always expressively staged: time slows behind him as Macbeth speaks of his black and deep desires, he slips out of the party he's giving for Duncan [a piano plays gentle jazz]; the dagger is a sound, merely, very much “of the mind”.
Buckroyd sees this as a story of children and childlessness, too, and a small child [variously The Boy, Fleance and Macduff's son] is a powerful presence from the very start – playing with his toy tank, exchanging his wooden sword, momentarily, for a real one, appearing as one of the apparitions, a cardboard crown “upon his baby-brow”. The weird sisters, too, are central: they sing hauntingly at the opening, and their voices are always otherworldly. The soundscape and the music [John Chambers] use techno drums for battle, melody for the witches, and some chilling effects – the scream of an owl, the cry of women.
Stuart Laing is a man-of-the-people Macbeth, never at ease, switching from battledress to dress uniform to casual shiny blue suit. A compelling performance, restless, troubled. His Lady M [Esther Hall], by contrast, is a study in stillness and steely determination. Until her maternal instincts kick in – she appears to warn a woman who rushes off to rescue Fleance and send him away. After the supper, she is left sobbing at the table, and appears again only as a broken reed, her candle held like a dagger before her in a mad echo of her former strength.
A fine company of actors bring credibility to the familiar story, and clarity to Shakespeare's text [no “imperfect speakers” here] – James Marlowe an excellent Malcolm, Nicholas Bailey a human Macduff, Moray Treadwell an avuncular Duncan.
Banquo [Simon Ludders] springs up through a trap to appear at the centre of the last supper table – effective with sound and light, but not without comic effect, and titters from the audience second time around. But for the most part the action is powerfully staged: the death of Macduff's boy, the atrocities of war, “something wicked” as Macbeth enters, even the poor porter [Christopher Price]. The ending is swift – the “leafy screens” are camouflage capes, Macbeth takes off his body armour and is despatched offstage.

Not sure what the children in the audience made of it - “Emily went to sleep”, one mum confessed - but this is an energetic, engaging Macbeth, the classic tragedy clearly and passionately told.

Email ThisBlogThis!Share to TwitterShare to FacebookShare to Pinterest
Labels: colchester mercury, Macbeth, made in colchester