LORD OF THE FLIES 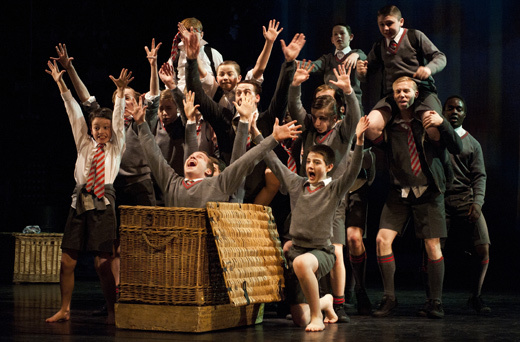 LORD OF THE FLIES

Golding's cautionary tale has been staged before [ and filmed twice ]. Now it's an inspired dance piece from Matthew Bourne's New Adventures and Re:Bourne.
Adapted, with typically creative perversity by Bourne and his co-director Scott Ambler, it retains characters and events from the novel, and successfully captures its spirit, despite giving the island the elbow and stranding these lost boys on the cavernous stage of a deserted playhouse.
As we take our seats, the excited buzz is echoed through the open scene dock; it builds in a crescendo of whistles and rioting before the choirboys, smartly regimented, come marching in.
The fixtures and fittings are imaginatively pressed into service – costume rails, wicker skips, fire buckets. The conch is a [Shell] oil drum, Piggy is crushed by a massive lamp dropped from the flies. The boys forage for crisps and icecreams.
Bare feet, bullying, tribalism mark the breakdown of civilization. We see violent subjugation, a showdown, and a tsunami of rubbish thrown down onto the stage before the UN blue beret rides to the rescue. The teddy bear, who's survived it all, is abandoned with the last vestige of innocence as the boys troop off the way they came in, leaving Ralph [Sam Archer] to ponder the catastrophic events played out on the jungle stage.
Much of the dancing is visceral and strongly rhythmic. Simon, the dreamer, beautifully danced by Layton Williams, has a wonderful solo with cello accompaniment [Robin Mason, presumably the only live musician against the pulsing back track – the score, by Terry Davies, moving from choral to wild clamour]. He's joined by Ralph and Piggy [Sam Plant] in a tender pas-de-trois.
The death of Simon – washed out to sea like Piggy in the book – is superbly done, and the Beast [ a zombie corpse ? a passing vagrant ? ] is genuinely terrifying, not least when he is brought to life by the tiny witness. Jack, the feral baddie set against Ralph's reasonableness, is a physically expressive Danny Reubens.
The Wells is just one stop on a national tour, recruiting 22 boys at each port of call. A dream opportunity for them, and for the audience an amazing realization of an iconic story.