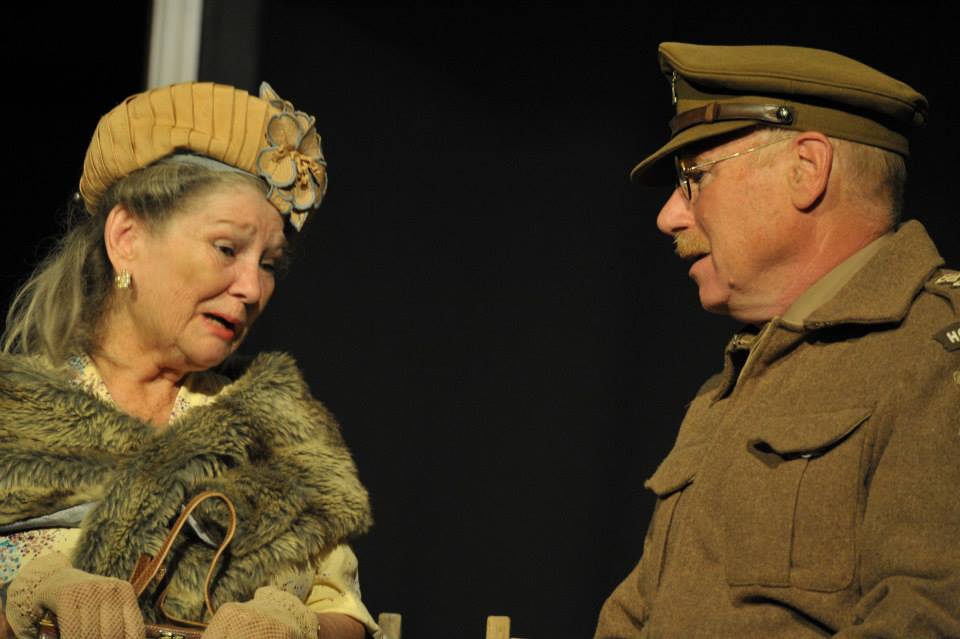 Dad's Army on stage ? I recall the Seventies spin-off, featuring almost all the original cast in a kind of variety bill of songs and sketches, and then of course there was the Leslie Grantham vehicle which revived some of the lost episodes.
TAB's offering is a more straightforward staging of three favourite episodes.
A brilliant opening, with the huge cast singing Mr Hitler and marching into the very hall where the real-life local LDVs drilled seventy years ago. And a moving finale, with everyone singing along to We'll Meet Again, led by chanteuse Mandy Oliver, whose superb solos helped to bridge costume and scene changes.
A company of twenty or more, including a U-Boat crew best described as motley [Liam Mayle their “insolent swine” commander] and a bevy of ladies for “Mum's Army” [Rita Vango outstanding as Mainwaring's Brief Encounter].
These are familiar stories, with lines and characters we've loved for years. Of the principals, Terry Cole captured Mainwaring and his dyspeptic smile to perfection, and in a much smaller role, Chris Piper recreated verger Yeatman with uncanny accuracy.
Elsewhere, the spirit if not the persona of the platoon members was affectionately invoked by, amongst others, Peter Eyre's ga-ga Godfrey, Bob Ryall's eager Jonesy, David Saddington's wild-eyed Frazer and Martin Baker's fresh-faced Pike. Roger Saddington purred through his laid-back “Jack Buchanan” Wilson, and John Mabey brought a cheeky comic energy to the incorrigible spiv Walker.
Inevitably, pace and energy were sometimes sacrificed to scene changes, and the subtle punchlines proved hard to recreate on stage, but nonetheless a very enjoyable homage to one of the best ever British sitcoms.

This stage version of Jimmy Perry and David Croft's unforgettable recreation of life in The Home Guard during The Second World War has all the old familiar faces plus a few new ones on the distaff side.
Especially memorable was highly glamorous Mandy Oliver's torch singer performing the very best of the songs of that period. Her absolutely clear and every note pure singing voice went straight to people's hearts.
Leading the raggle taggle troop intended to defend us from Hitler's marauding hordes was Terry Cole's would-be authoritative yet clumsy Captain Mainwaring. He managed to capture the essential character but also added something of his very own.
Roger Saddington also put his own gloss on the role of Sergeant Wilson to good effect with Martin Baker as the naif and innocent son of his inamorata, Sue Ryall's forceful Mrs Pike.
The boots on the ground were represented by David Saddington's incomprehensible Scotsman Frazer. Even if we couldn't decipher his Scottish we knew exactly what he was trying to convey. Private Walker, plump on the profits of the black market, was in the hands of sturdy John Mabey while Peter Eyre's doddering oldest volunteer Godfrey brought up the rear of the troops.
Bob Ryall's Jones the Butcher knew exactly which character he was playing and how to attract the ladies with his lamb or beef.
Worthy of mention was Liam Mayle's youngest cast member's U-Boat Captain doubled with Private Cheesman.
Alan Ireland and Chris Piper were the senior non-Army personnel in the shape of Chief Warden Hodges and Mr Yeatman while Jesse Powis was the Colonel and Mr Gordon.
The supporting Ladies included Rita Vango as a seductive Mrs Gray, Sheila Talbot as Mrs Fox, Ruth Westbrook as Ivy Samways and a very attractive Waitress, and Pauline Saddington as Miss Ironside.
The Hall was ideal as an open rostrum stage (it was a Drill Hall for the real Home Guard) but Joanna Gent was the director of this slow production who had to deal with the noisy clumping feet of the very large cast on the wooden floors making continual entrances and exits. Plus a cast rather lacking in stage energy and pace. A strip of carpet would have dealt with the first challenge. Getting a cast to sink their teeth into a comedy is more difficult than it might seem at first.