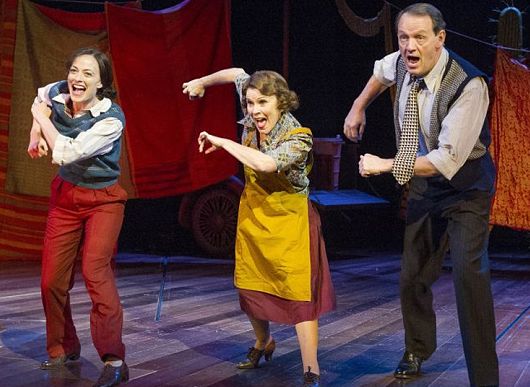 Uncle Jocko, Seattle's Mr Talent, wants no mothers in the wings. A sentiment shared, years later, by a harassed stage manager in burlesque.
The pushy parent in question here is Mama Rose, whose more famous daughter was Gypsy Rose Lee, and whose story is told in what is possibly the best of the Broadway backstage musicals.
It's given a pretty near perfect performance at Chichester, maternity ward to the West End, directed by Jonathan Kent with Musical Director Nicholas Skilbeck.
The show belongs to Imelda Staunton. She's there at every turn, pushing from the wings, micro-managing her troupe, shifting scenery, driving hard bargains. When her pet protégée, and eldest daughter, turns her back on the family firm and elopes with a chorus boy, Rose crumples for a moment before ripping up the letter, rallying and re-focusing her maternal ambitions on the younger sister. And in Rose's Turn, at the end of the show, this frustrated showgirl, fortified by one last dream, holds the empty stage and basks in imagined applause.
Kevin Whately plays Herbie, with a limited range of facial expressions and a serviceable voice. Lara Pulver is wonderful as the overlooked, then over-exploited Louise [aka ecdysiast Gypsy Rose Lee]. There's a host of superb supporting performances, not least by the children in Mama Rose's troupe, and, one of many, Julie Legrand who has a lovely double as Electra, the stripper with illuminated assets, and the formidable PA Miss Cratchitt.
A great recreation of the dying days of vaudeville [and the threat of Burlesque], superbly designed by Anthony Ward with a moving proscenium and a proper orchestra pit for the excellent band.