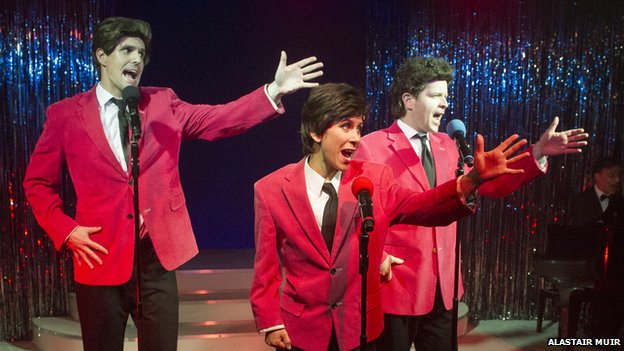 FORBIDDEN BROADWAY
at the Vaudeville Theatre
22.10.2014

You have to know it, you have to love it. The Great White Way, that is. Not so much to appreciate this accessible but seriously entertaining show, but to deliver the spoofs, parodies and pastiches with such consummate skill and obvious affection.

The five performers in this “fringe revival transfer” – not least the indefatigable pianist Joel Fram – are all steeped in the tradition, and take no prisoners in their viciously accurate attacks on the foibles and follies of musical theatre.

It kicks off with front of house fun: mobiles, tweets – Everyone Thinks They're A Critic – and touts, flogging duff seats in the style of Fugue for Tinhorns.
Then the performers are in the firing line: from triple threat professional children abused by director Trunchbull to veterans of the musical stage, this latter category enhanced by the presence of Christina [Diva Moments] Bianco. Liza, Angela, Kristen Chenoweth, the original Glenda, Madalena Alberto, the new Evita, Rita and Cheeta the two Anitas head to head, and Bernadette Peters – See Me On A Monday Please. Amongst the boys, male chanteuse Mandy Patinkin – Somewhat Overindulgent – Hugh Jackman, Alex Wonka Jennings and Robert Lindsay, currently over the road at the Savoy. All nailed by the hard-working quartet of singers: Anna-Jane Casey, Ben Lewis and the superb Damian Humbley joining the aforementioned Miss Bianco.
No show, it seems, is left unpanned – Cats auditioned a la Chorus Line, cardboard cut-out dummies in Les Mis, Wicked – Defying Subtlety – Miss Saigon mercilessly trashed, Jersey Boys, Mamma Mia. And no-one is too big to be brought down – Sondheim and Ho Chi Cameron both victims – and even the corporate sponsors are named and shamed.
Forbidden Broadway – a firm favourite on both sides of the pond – is devised and written by Gerard Alessandrini and directed by Phillip George.

I don't usually condone, much less publish, pirated pictures or video, but it seems in keeping with the show's opening to share this shaky mobile phone footage from last summer, when the Menier cast appeared, along with many of the shows they lampoon, in Trafalgar Square for West End Live.

and here's a new trailer for the current show