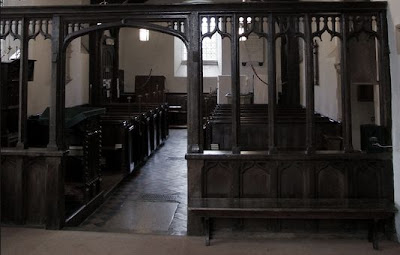 This little church has seen countless changes in its nine centuries, many of them in the lifetime of William Byrd, who lived close by for the latter part of his life, but rarely ventured inside. Under the patronage of Lord Petre, this Catholic composer managed to survive the Reformation and happily composed both masses and Anglican anthems.

We heard both in this concert. The imitative polyphony of the Mass for Five Voices, the lower parts adding body and warmth to the sound, and O Lord Make Your Servant Elizabeth, written for the Virgin Queen. There was music from the "lost generation", between Tallis and Byrd, including a simple anthem by William Mundy; its Amen delivered with affecting simplicity.

After the interval – rum punch in the churchyard – a much wider range of music: Henry VIII's greatest hit, with tambourine obbligato from the Singers' conductor Christopher Tinker, and the very different sound worlds of Italian madrigals and five colourful, energetic songs by Kodaly.

A typically impressive evening of choral music from the Stondon Singers, with two bonuses: an organ Pavan by Byrd [Tinker again] on the charmingly voiced instrument, and a delightful extract from Henry Reed's Streets of Pompeii, first heard on radio sixty years ago.
on Thursday, July 12, 2012

We are fortunate that the Stondon Singers have, for many years, specialised and presented an annual concert dedicated to the memory of our local recusant Catholic composer, William Byrd. Interest in the music of William Byrd appears to be increasing, helped by a television programme ('Sacred Music') recorded at Stondon Massey a few years ago and the completion of a recorded cycle of Byrd's Latin texts by the Cardinall's Musick under their enthusiatic director Andrew Carwood... picking up a number of Grammophone Awards along the way. Cardinall's Musick is mid-way through an ambitious tour celebrating William Byrd's music visiting not only the usual London venues and Festivals but smaller places associated with the great composer. Andrew Carwood was very keen to include Stondon Massey on the tour and we are proud to say that on Sunday 2 September 2012 the Choir will performing two concerts at St Peter & St Paul Church. For Byrd lovers this is a must attend event. My wife and I heard the Choir at Fotheringhay last weekend, the place pf execution of Mary Queen of Scots. The power of the Musick's voices, the diction, the crafting of the words of Byrd's Latin text was moving and hugely memorable. Do come to Stondon and see for yourself.