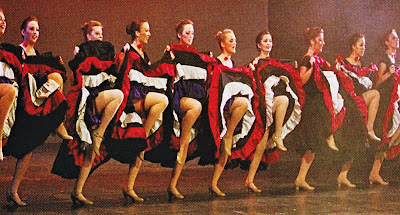 The Brentwood arm of Essex Dance Theatre – no run-of-the-mill dance school – gave an impressive end-of-year showcase in Brentwood Theatre.
The small stage was well used, though clearly a larger space would have been easier for the dozens of dancers. I was impressed with the costumes, some thriftily recycled from past shows, and with the amazing variety of styles represented.

The younger performers were given just as much prominence: a cutely inventive Little Girls, teddy bears for tap, Kermit the frog [a superbly amusing routine, this; we critics at the back were delighted to hear Stadtler and Waldorf at the end] and gossamer scarves for Part Of Your World.

Ten fearless grisettes did an ambitious Galop, followed immediately by a riot of psychedelia for Austin Powers. I loved Kim Bradshaw's interpretation of Shine Your Shoes – a real production number – and her Charleston, with lovely flapper dresses and grey shoes. Rhiannon Munston-Hobbs, ex EDT student, contributed several numbers, including a brilliant That Man, to the music of Dutch jazz diva Caro Emerald. Kate Tozer choreographed a scintillating number to Leona Lewis's Collide, Jane Ben-Aderet a coolly classical piece to Bach, and a classy oriental number.

The finale saw the flappers joined by scores of Union Flags, jazz hands and exuberant bows to a well-deserved ovation.