LIGHTING UP THE LANE 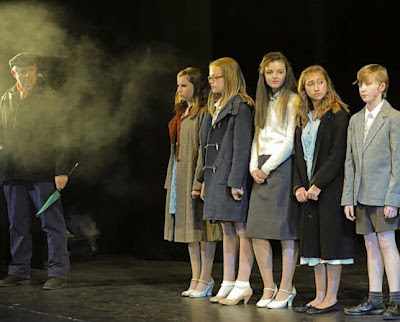 So that's why it's called the Queen's. Like Her Majesty, Hornchurch's own theatre is celebrating sixty glorious years. And what better way to do it than one of its community musicals, filling the stage with enthusiastic, and impressively talented, local actors, directed by Patrick O'Sullivan, and supported by a dedicated professional team from the Queen's Education and Outreach Department.

It is an amazing story. The first council-funded theatre in the UK, born out of noisy public meetings and the unstoppable enthusiasm of youngsters whose love of theatre was sparked on the steps of the silent cinema.

But this is not a dry documentary. Devised specially by a local writing team, headed by Dave Ross, it's more of a fable, a fantasy of the way Chaplin's City Lights, re-enacted by the kids on the block, fuels a passion for performance which survives war and politics, and sees the fleapit on Station Lane transformed into an auditorium for fortnightly rep, pantomime and amateur operetta. 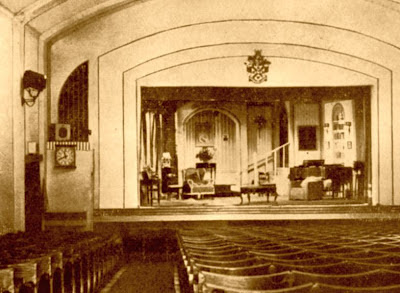 In front of a near-life-size façade, this affectionate alternative history features heroes and villains, and an angel in the unlikely shape of actor-laddie Steven Roberts [Steve Probert].

Steven Markwick's music [he was also MD for the show] catches the mood nicely, with a knees-up opener – "The Pictures or the Pub", a clever dovetailing of the cynical "More" [I'd Rather Be A Wealthy Philistine – still a common cry sixty years on] and "On The Rebound", the tongue-in-cheek dream sequence of "Paying Guest" and the charmingly poignant "On The Steps Of The Silent Cinema".

The end of Act One, with the whole company reprising two of the strongest numbers as tragedy strikes, was very effective, as was the moment when the children turn into young people.

But fittingly, it is a company show, and everyone involved gave 100% to this timely retelling of a success story which still continues to this day. The bulldozers did eventually raze the picture house, once the company had moved up to Billet Lane and the purpose-built house we know and love today. And the Queen's Players were succeeded by Cut to the Chase, whose special anniversary season starts in August with Return to the Forbidden Planet, one of the greatest hits ever to come out of the Queen's ...

Email ThisBlogThis!Share to TwitterShare to FacebookShare to Pinterest
Labels: LIGHTING UP THE LANE, Queen's Hornchurch