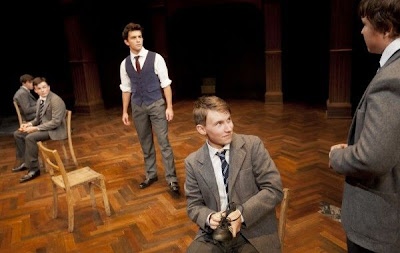 Near the end of its time at what used to be the Comedy, this superb Chichester transfer gave its understudies a chance to show what they could do with Hare's brave new play and Rattigan's famous old favourite.

And good for us to see how much of the rapturous reception given to South Downs was due to the performance and how much to the writing.

The design for this proscenium version has a wooden tab curtain, done up like an Honours Board. And heavy wooden structure for the school, a massive crucifix suspended above the action.

Some of the regular cast were still in post – Bradley Hall's strange Jenkins, even more peculiar than I remember down in Sussex, and Andrew Woodall as the sarcastic bruiser of an English master. The bright scholarship boy, unable to dissemble, adept at asking awkward questions, was beautifully done by Tom Spink, who normally gets to play Gunter. His martyred look was absolutely believable, the key scene at the tea table was beautifully done, though I found it hard to believe Emma Thornett as an old-style West End actress. His House Prefect was Rob Heaps, normally the new teacher come to replace the defeated Crock in the Rattigan. Excellent here, if slightly old, with more than a hint of Rupert Everett in Another Country.

The chaplain – a much deeper, rounder character than Spear – was movingly done by Mark Elstob. Nervously moving his lips, coming close to confessing his "thing of darkness" he gave a memorable performance here, and after the interval in The Browning Version, with Bradley Hall an interesting Taplow, Heaps as the dashing young science teacher, lover of Emma Thornett's toxic Mrs Crocker-Harris. And in a neat symmetry, Jonathan Bailey, normally the House Prefect, played the new classics teacher.

I reviewed the Hare, together with Nijinsky, last year in Chichester, and I shall catch this memorable double bill once more, in its final week. It will be good to see the original cast again, but no-one could feel short-changed or dissatisfied with this impressive one-off reworking. 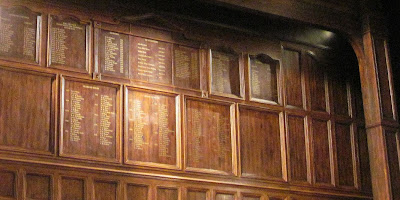