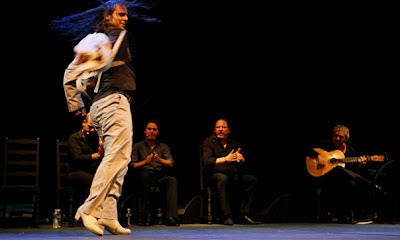 BARRULL – A FLAMENCO LEGACY
Jairo Barrull at the Civic Theatre
29.06.12

Nothing touristy or quaint about these guys: you feel you are getting echt-flamenco, just as if you were in Frontera country. Few concessions to the uninitiated, either. No introductions, no clues as to what the songs might be about.

We began with a guitar meditation from the excellent Eugenio Iglesias [his solo at the end of the first part was amazing, too, hypnotic enchantment from a master I could happily have heard in recital], joined by a voice, with hand gestures, clapping, and finally, with a flash of patent leather and a clack of cuban heels, footwork from bailaor Barrull himself. Percussive, expressive, often flamboyant but sometimes just a flutter, this was some of the most virtuosic dancing I've seen in any genre.

There was some fine singing, too, especially from the rich, passionate voice of Manuel Moreno Carrasco.

Much too soon for the noisily appreciative audience, we were into the Fin de Fiesta [The Party's Over], as the five men in black
step out from behind their microphones and their monitors, and give us the pure unplugged soul of Spain, before ambling off into the wings.