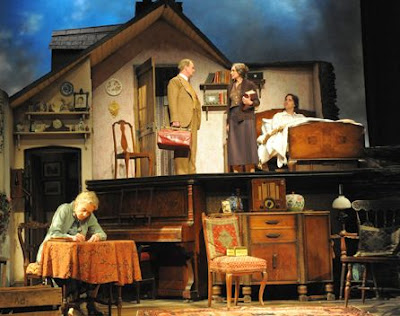 LADIES IN LAVENDER
at the Cambridge Arts Theatre
30.06.12

It was only ever a slight piece – an improbable tale made into an old-fashioned film, lifted from mediocrity by music, landscape and two movingly subtle central performances.

Almost all of this is missing in Shaun McKenna's adaptation of Charles Dance's screenplay. Some of Nigel Hess's music survives. Liz Ashcroft's set is a wonder of compact invention: rocky Cornish sea-shore, parlour, bedroom, garden all shoe-horned onto a small stage. But it often seems cramped, with sightlines and blocking occasionally an issue.

Hayley Mills and Belinda Lang are charming and convincing as the spinster sisters, living in the shadow of war, whose sibling rivalry is a key element of the drama. But they lack charisma, Mills in particular delivers her lines beautifully but with little subtlety. Compared, say, with Abigail Thaw's rounded character as the bohemian artist Olga.

Good character support from Robert Duncan, a country doctor in the Robert Hardy mould, and Carol Mcready, wringing every ounce of rustic comedy from Dorcas, the housekeeper. Robert Rees was the young Polish violinist, shipwrecked on his way to the New World. Perfectly acceptable, but in the age of actor/musicians it seems a shame not to cast someone who could actually play the instrument.

Production values elsewhere were high, and Robin Lefevre's production had some lovely, poignant moments – opening and closing with concerts on the wireless, though I suspect that had I been able to see the fiddler above the roof I should have found it a little cheesy …