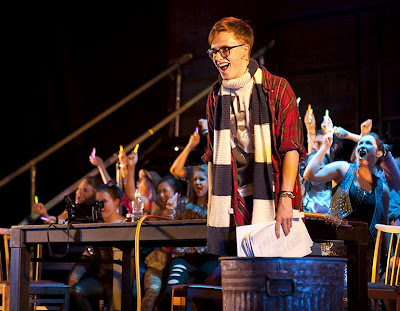 I know now what it would feel like to be a disaffected teenager at the opera. What are these people in their attic singing about ? Why can't I get into this music ? Why can't I understand the words ?

And that chorus, including some really young performers, is one of the strengths of the production, always inventively used, with lighting and grouping highlighting individuals and clusters. Sleeping, sweeping across the stage, singing with raw energy, they were a forceful, vital presence in the story. And the big number – Seasons of Love – was impressively put over, with two amazing soloists soaring over the masses.

The many characters were given performances of maturity and style.
Sam Toland as the troubled rock guitarist, and Tara Divina as an aggressively sexy Mimi both caught the musical idiom nicely. Ollie Fox was outstanding as the "vagabond anarchist" – his relationship with Angel [a beautifully judged interpretation from Bart Lambert] was an island of tenderness in the "coarseness and noise" – his grieving solo, with the drag frock, was superb. Ashton Reed made Maureen a credible "performance artist" – her pretentious pastiche a joy – with the excellent Deanna Byron as her lawyer lover. Benny the landlord – torn between two worlds – was strongly sketched by Josh Butcher. The "witness" [Puccini's painter] who leads us through Alphabet City, was Luke Higgins, an engaging guide who confidently carried the narrative and sang powerfully, too.

A packed house, a great company in a performance which overcame huge challenges and some unfortunate technical issues. A stunning achievement for such a young cast: next year's challenge, another very grown-up musical, another Puccini plundering, Miss Saigon.