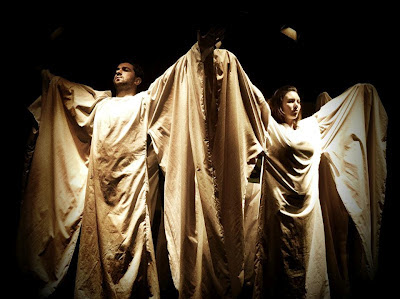 THE LARAMIE PROJECT
Chelmsford Theatre Workshop at the Old Court
26.07.12

Jim Hutchon was there for the Chelmsford Weekly News:

"For her début as a director, Kelly McGibney has chosen a subject close to her heart - the brutal murder of young gay American Matthew Shepard in a hate crime that shook the insular world of Laramie, Wyoming.


The play depicts the events leading up to the murder through the words of Laramie residents, and Kelly employed a simple, clear-sighted approach to the cold-blooded and casual details of the murder and reactions. This was highly effective in getting the sheer enormity of the appalling crime and the underlying attitudes through to the audience.

The story then rather started to unravel as the narrative was increasingly given over to the well-rehearsed arguments for gay tolerance in a frankly rambling, undisciplined and over-long follow up. There were still signs of very imaginative directing – stunning visual cameos and superb acting, but they couldn’t balance the general tedium of a 3 hour play that, with the superb material at the writer’s command, should have been highly selective, much more effective and shorter.

The eight actors played greatly differing parts from red-necks to vicars to anti-gay campaigners to residents, all convincing and with great understanding and rock-solid accents. The set was beautifully minimal and the sparse music well-chosen and to the point."

Docudrama, verbatim theatre or agit-prop – however you label it, this is an important piece, a GCSE set text and a classic of its kind.
None of which makes it any easier to do. The original piece was done by actors [Tectonic Theatre] who went out to Wyoming to interview the characters who people the play. The eight members of the company took on the sixty-plus roles, as well as occasionally playing "themselves".

CTW, in a typically ambitious project of their own, are at one further remove from the reality: standing on the other side of the world, playing the actor/researchers as well as the huge range of real people whose lives find themselves under the media microscope when a brutal attack becomes a notorious hate crime. Mothers and medics, friends, walk-on strangers, community leaders, academics and students see their Wyoming town – "good people, lots of space" – re-defined by a sordid assault.

The eight performances were excellently done – a small detail of costume, a subtle change of tone, of body language, and there's another Laramie local before us under the harsh glare. We watch, scarcely breathing, scarcely believing, as the place tears itself apart; the incoherent, the inarticulate, the poetical and the passionate all clamouring for our attention. Hearts are often on sleeves, emotions rarely held in check. We sense that many of these people would have been just as happy to open up to Jerry Springer.

Amazing how much religion shapes the story. Not just the priests and the preachers, but the echoes of the crucifixion against the fence, the vigil at the shrine, the suggestion of martyrdom, the excommunication [by the Mormons] of one of the accused, the constant presence of God and the Bible in the lives of Laramie.

A strong, impressive end to the season for CTW, directed by Kelly McGibney and Tony Ellis.