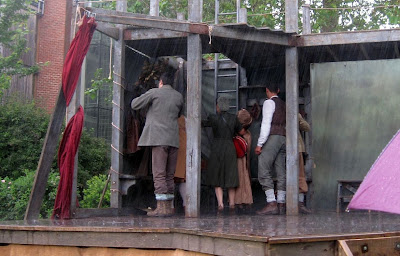 
Saw this lovely little Hamlet in Corpus last year. Now it's back on the road with a new cast; I saw it at the Globe, when the space and the audience always seem to bring the best out of the touring companies. But decided to catch it in the wild again – another Cambridge garden, this time the vast acreage of the Fellows' Garden at King's, over the road from the college itself.

The stoical players braved the heavy shower which greeted the start of the show – it's been wet and windy at every date so far, apparently.

Michael Benz makes an amazing Hamlet. Intelligent, but clearly disturbed, his way with the text combines clarity, insight and emotion. He's joined by Miranda Foster as his mother [and a great gravedigger's apprentice] and Dickon Tyrrell as his various fathers.
Ophelia was touchingly done, and beautifully spoken, by Carlyss Peer, who like the rest, dutifully and skilfully doubled many other minor characters. I was especially moved by the moment when she tenderly gathered up her own corpse in her arms. Similar resurrections at the end, before the lively jig – the stage much dryer by now – and off to Oxford … 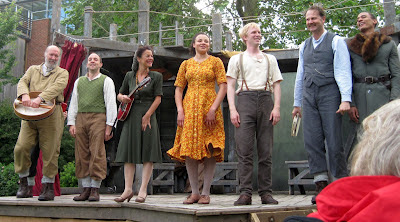