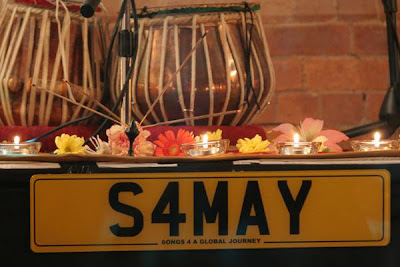 SAMAY – FREEDOM OF THE SOUL
Cramphorn Theatre
18.09.10
World Music worth of the name, Samay create a fusion of Indian, jazz and European traditions, which makes a very palatable blend. Easier on the Western ear than much of the classical raga repertoire, it is melodious, inventive and hypnotic.
The five talented musicians – two from India [originally], two Brits and one from Italy – bgean with an exploratory improvisation, and then we were into a fascinating journey: the intricate rhythms of Railway Dreams, the raga-based Space Calcutta, and the joyous Fronteras, penned by Javier Geras, who played bass in an earlier Samay line-up. Mirror, Mirror which ended the first set, featured a great dialogue between Bhupinder Singh Chaggar's dexterous tabla and the sweet sarod of Soumik Datta.
Three contasting pieces concluded this gig – the last in the amazing series promoted by Gilda Sebastian. Tuesday showcased the sax of Jesse Bannister, very much the heart and soul of this outfit, and the acoustic guitar of the enigmatic Giuliano Modarelli. Not at all Eastern, really, but a funky soundtrack to a music video, set in exotic Leeds, for their début album.
Then Macondo, inspired by Marquez, and Red Sea, with mouth music and clever hand-clapping to the urgent beat.
on Sunday, September 19, 2010