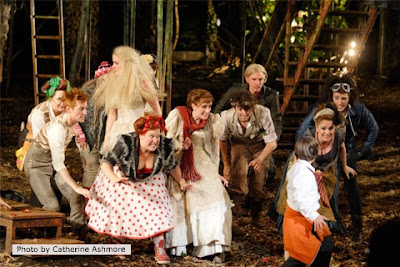 Regent's Park Open Air Theatre
09.09.10
For all its flaws, this Sondheim was made for the forest floor of Regent's Park.
I saw a matinée [no, no rain and some sunshine, though the seats were a little soggy], so lost out on the power of the encircling gloom, but the show was nonetheless incredibly powerful, with a faultless cast, from the voice of Dame Judi to the child who narrates the mashed-up nightmare fairytales.
This interpretation [ director Timothy Sheader ] adds considerable emotional clout to the piece [the original London production had Nicholas Parsons narrating !]. The boy is running away from some sort of family row; on the edge of the woods he unpacks random dolls from his rucksack, and acts out with them the stories we see unfold. He is continually involved in the narrative, until the second act, when the sequel is a mere dream, in which he is finally sacrificed to the giant. He is the only “real” character, with his school blazer and bright red lunch box. The others are all pantomime creatures – this is a very British interpretation.
Hard to single out performances, but I did enjoy Beverley Rudd's gormless “Little” Red Riding Hood, and Michael Xavier's sexy Wolf. He was also a preening Prince, and with Simon Thomas as Rapunzel's swain, brought the house down with one of the strongest numbers – Agony. Great to see Gaye Brown still on top form as the Wicked Stepmother, and Billy Boyle as the Mystery Man, wandering into the action and wilfully smoking, heedless of the risk of forest fire.
But the performance of the afternoon was Hannah Waddington's Witch, beautifully acted and sung, both in and out of her grotesque tendrilled costume with its Sher crutches.
The design, by Soutra Gilmour, blends into the trees of the park – the many platform levels echo the shabby seating. Loved Grandma's bed, and her window, and the scrap-metallic Giant. The hen made out of a lawnmower, and the beanstalk made out of umbrellas, were two more deft touches.
For all the foolery and colourful frocks, this is a dark piece, full of recrimination and blame, blood and blindness. The woods are a metaphor, wouldn't you know, for loss of innocence and the scary grown-up flipside of happy-ever-after.
Not often done, and never again quite like this. Video cameras in evidence when I caught it near the end of the run. Any chance of a DVD, I wonder ...