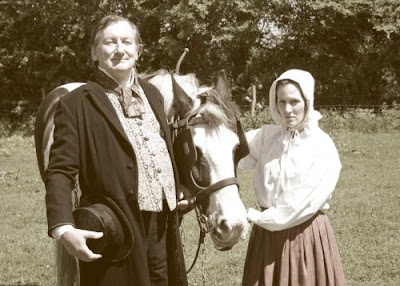 THE MAGICIAN'S BOX
Mad Dogs and Englishmen at Sandford Mill
23.09.10
When the Industrial Revolution finally came to the farms of Essex, John Joseph Mechi, the Magician of Tiptree, was in its forefront.
In Ann Courtney's intriguing piece, he appears before us, not as a wraith, a spectre, but as a Public Man, ambitious for office and eager to embrace change.
His boxes – fetching hundreds at auction today – were his claim to fame, though he is aware that his name means nothing to us now.
A long coffin chest dominates the stage. It is a horsedrawn trap, a kitchen sink, a clerk's counter, Marat's bath.
Four versatile actors bring all the characters in Mechi's story to vivid life – the Edinburgh Henrysons, the Learned Blacksmith, poor frail Fanny, down-to-earth Rose, farm hand Thomas, whose passionate speech on poverty could find echoes even today, thespian Mr Dickens and the Dickensian Mr Goby in his counting house.
The man himself was played with a complicit twinkle in the eye by Noel Jones, who made us care about his dreams, and share Mechi's determination to transform the face of farming, bringing steam ploughs and irrigation to his Model Farm on the “sodden, blasted heath” at Tiptree. Where we now find Wilkin and Sons, who commissioned this fascinating play. It was first performed there in July; but the industrial museum at Sandford Mill was an inspired venue on its tour of Mechi's agricultural heartland.
on Monday, September 27, 2010

A great bit of scholarship is this whole production.

I hope it is further developed and communicated in other formats.