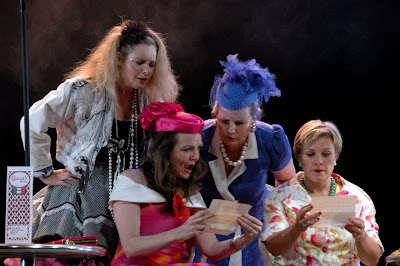 FALSTAFF
Mid Wales Opera at Colchester Mercury Theatre
14.09.10
for The Public Reviews
“I wouldn't be too fussed to see another ...” Her first live opera, it turned out, in a lifetime of theatre-going. Not perhaps the best choice as an introduction to the heady world of lyric theatre. Because though it is melodically rich and full of dramatic incident, it does lack the big tunes and powerful emotions of, say, Rigoletto.
But an ideal choice for Mid Wales Opera pocket tour, of which this was the first date after its Powys opening. Just ten characters, and a streamlined plot, set, apart from the spooky closing scene, in the tavern or the bedchamber.
Amanda Holden's new translation was felicitous and often very funny, though she's not the first to rhyme 'garter' with 'inamorata'. And Nicholas Cleobury's precise, pacy conducting kept things moving. Just ten in the pit, though, so some of the richness lost.
Bridget Kimak's design was brilliantly simple: a huge disc filled most of the stage, with detail added as necessary in long, silent, stylised scene changes. Herne's Oak was impressive, and the whole of the dénouement, with its menacing puppets, gloom and haze was lovely to look at.
Modern dress, with the Merry Wives looking Absolutely Fabulous, Caius [Ted Schmitz] as a Tory candidate, and Falstaff disappointingly drab in khaki for the seduction scene.
Charles Johnston was a dour Falstaff; he sang the demanding role with character and clarity, but with little of the warmth, the “merriment and splendour”, that would make him a loveable rogue. His “Honour” aria was well shaped, and his optimistic “Go On, Sir Jack” and his renewed energy for “Think of that!” were highlights of the production. Physically he was a long way from the fat knight – no Terfel fatsuit for him – with a prosthetic belly visible behind the bursting buttons of his shirt. The object of his affections, Alice Ford, was brilliantly done by Lee Bisset; wonderfully well sung, and great fun, too – shoving Falstaff into the laundry basket, with the help of the equally feisty Meg [Catrin Johnsson]. The cuckold Ford [Wyn Pencarreg], bald then bewigged as Brook, was a vivid presence, and Falstaff's remaining retinue [Simon Wilding's greaser Pistola and Stuart Haycock's grubby Bardolfo] grasped the many comic opportunities in Martin Lloyd-Evans's intelligent direction. In this version, Caius's serving woman is instrumental in bearing messages and moving the plot along, and Gaynor Keeble, brisk in blue, made an excellent Mistress Quickly. Young love is represented by Nannetta [a sparkling Marlene Grimson] and Fenton, Benjamin Segal, who made the most of his amorous arias and duets. The ensemble singing was a model of clarity and crispness, and the “happy hereafter” ending sent us out on a high.