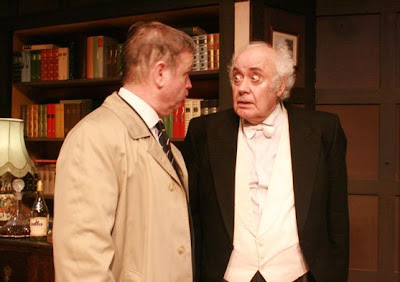 Ian Dickens Productions at the Mercury Theatre Colchester
for The Public Reviews
06.09.10
The title says it all, even before we meet Miss Maple [sic] and the aptly named Inspector Pratt.
Peter Gordon's 1993 play is an affectionate pastiche of your classic Country House Murder Mystery, with shoals of red herrings and a Cluedo collection of whodunnit suspects and weapons.
A near-capacity house at the Mercury enjoyed it on all kinds of levels, though the riper innuendo sometimes needed pointing. We were kept guessing to the end, as miscreants were unmasked and motives revealed. The script was amusing, with one or two really strong sequences, and Giles Watling's experienced touch helped a battle-hardened cast make the most of it.
Roland Oliver was crusty Colonel Craddock – loads of bluster and the odd touching moment, with Sandra Dickinson magnificent as his mem-sahib – tremendous presence and a voice from the Betty Marsden school of comedy characterization.
Darren Machin had the moustache, the macassar, the froggie accent and the two-tone shoes, all unmistakeable marks of a cad. I liked the way he used his entire body to express his feelings – most amusing. Elizabeth Williams stepped into the sensible shoes of Margaret Rutherford and Joan Hickson as the interfering spinster sleuth. Michelle Hardwick was the acid-tongued Elizabeth, in an unconvincing wig, Chloe Newsome the dowdy Dorothy, with Erin Geraghty as the doomed mistress of the manor. Christopher Elderwood worked hard as the hapless constable, sidekick to the clueless detective.
The two plum parts went to the priceless Victor Spinetti, as the dotty butler Bunting, squiffy on sherry and lurking suspiciously, and Norman Pace as the Inspector, bungling, accident-prone with a way with words John Prescott might envy. It's a gift of a part, and Pace grabbed it by the scruff of the neck, with admirable comic timing, a nice line in slapstick and a huge range of physical expression.
The “quaint room”, unaccountably referred to as The Lounge, was nicely dressed, though the paintings didn't pass muster even as forgeries …
Some would say that the genre is beyond parody. Others might prefer Stoppard's dazzling scalpel. But Gordon's cosy hommage, the first in his Pratt Trilogy, makes for an undemanding couple of hours' entertainment, guaranteed to keep the punters amused by the acting and bemused by the Byzantine plot.
this piece first appeared on The Public Reviews