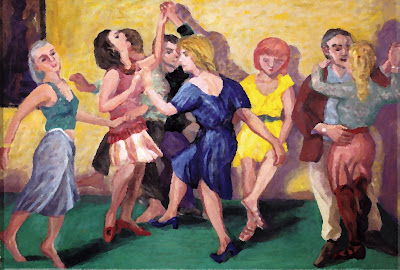 DEAD RECKONING
Outloud Productions at Brentwood Theatre
25.09.10
Comedy genius Eric [Rising Damp] Chappell has long dreamed of writing a thriller. Dead Reckoning first saw the light in Lincolnshire in 2006, and now it's on the road in Kate Beale's enjoyably tense staging for Leigh-based Outloud Productions.
Surly artist Tony Reed [a powerful presence from Rocky Rising] is haunted by the violent death of his wife; his drinking becomes heavier, his paintings darker and more disturbing. When an insistent stranger appears at his door, keen to talk about penal reform, and makes him a startling proposition, his new wife, Lady Macbeth in a cocktail dress, encourages him to act on his fantasies of justice and vengeance. Todd, fresh-faced, upbeat, with an engaging grin, was given a chilling edge of menace in a stunning performance by George Kemp, and Megan was played with steely coolness by Sally Lawrence, nervously twisting her wedding ring and the fateful bracelet. “I'll walk the dog now – it's growing dark,” she says, and we fear the worst.
Todd's accomplice was John Oakes, too young for the role perhaps, but with an unsettling Pinteresque power that was most successful in his quieter moments.
“Why am I telling you all this ?” Megan wonders as she unburdens herself improbably to this mysterious young man she's only just met. It's not realistic, or particularly believable, but then nor is Greek tragedy, and it was good to see an old-fashioned psychological thriller, bodies, twists, clichés and all, in this close-up and personal setting – the first full production in Brentwood's Audrey Longman Studio. And no gratuitous, gritty swearing ! Thank you, Eric.
original 'Tony Reed' created by Anthony Farrell
on Monday, September 27, 2010