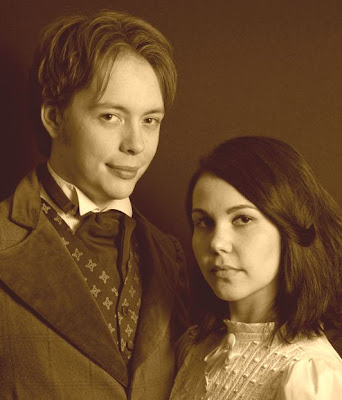 THE PICTURE OF
DORIAN GRAY
Chelmsford Theatre Workshop at the Old Court
24.09.10
John Osborne's version of Wilde's tale was written for television in the 70s. It was praised, and blamed, then for hinting at a homo-erotic attraction between artist and sitter.
But as Lord Henry says, “ … whatever was good enough for our fathers is not good enough for us.” So, like Matthew Bourne's ballet and Oliver Parker's film, Joe Kennedy's staging makes the undercurrent explicit, with full-on snogging with both sexes, an awkward violation before Dorian's cold leave-taking of his actress fiancée, and the Duchess transformed from a dowdy dowager to a thrusting vamp [Ruth Cramphorn, stunning as ever in a scarlet frock].
The women generally did well – a nice cameo from Lynne Foster as the formidable Aunt Agatha, and Leanne Johnson as the actress Sybil Vane. Terry Cole, too, was convincing as Uncle George.
Below stairs, we had two improbably youthful gentleman's gentlemen, perhaps reminding Dorian of the schoolboy he was when he first fell under the spell of Lord Henry, who poisons him with his hedonism and his French literature. And I liked the uniformed skivvies who changed the scene, though I would have liked more than just spill to light their work.
Of the principals, the palm must go to Tony Ellis's Harry, who, despite an idiosyncratic accent, delivered Wilde's glib epigrams and acid wit with real style. He aged well, too. Harry Sabbarton was a Dorian on the brink of corruption, with James Christie a somewhat unartistic Basil. Some dramatic moments from Philip Hart, as the scientist forced to share the awful secret.
Osborne is no Oscar, of course, and there were some awful sore thumbs in the dialogue: “not 100% sure”, “this day and age”, “quite special and unique” …
So despite the undeniable strengths of the production, notably the use of all the characters, the quick and the dead, for the “mysticism” speech and the powerful final scene, I suspect Wilde may be spinning elegantly in his Epstein tomb.
pre-production photograph: Dorian and Sybil


Jim Hutchon reviewed the production for the Chelmsford Weekly News:


John Osborne’s adaptation of Oscar Wilde’s novel plods its weary way across 18 years of the eponymous hero’s decline, and there were moments when I felt I had sat through all of them. It is lengthy and leaden-footed, and loses much of Wilde’s incomparable repartee.

That said, Joe Kennedy’s production has much to commend it, despite Osborne's slabs of dialogue with nothing much happening. There are some highly imaginative touches – the rape scene, and the scene where Gray's society friends desert him one by one, and the final flaming suicide are all beautifully handled.
Harry Sabbarton was Gray, not very convincing as a rich, eligible bachelor, and James Christie was the artist looking more like a bank manager, who painted the fateful picture as an act of love. Gray’s decline starts with the rape of his first love – played with real pathos by Leanne Johnson – who then goes and tops herself.
There is an enormous cast for CTW – 16 people on stage at the same time - and all of them well-drilled in creating the atmosphere of Victorian London society. Key acting plaudits must go to a beautifully modulated performance by Tony Ellis (as Gray’s long time friend) who has an unerring ear for the best of Wilde’s lines and a lesson to all in how to deliver them.
The set is nicely minimal but effective and the costumes are accurate and well fitting. But in the final analysis, the dark, brooding atmosphere of the original never surfaces and what should be mounting tension doesn't.
on Monday, September 27, 2010