THE MYSTERY OF ST FINNIGAN'S ELBOW 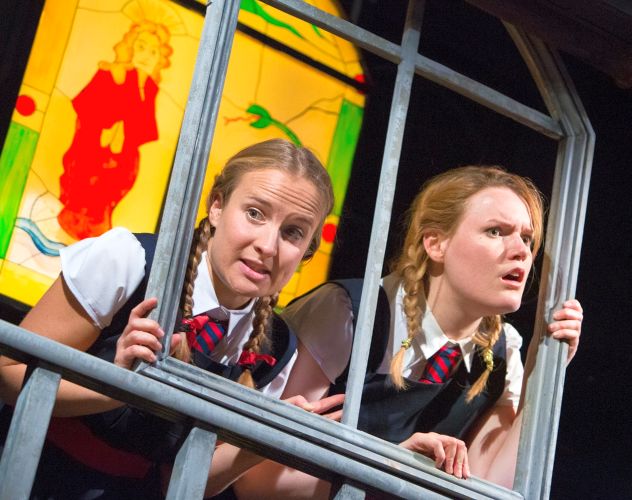 Multiple mysteries, in fact, in this seasonal school-story confection by the famed team of Pat Whymark and Julian Harries, writers and directors.

Who is the real gardener here, and who the secret agent [from MFI5] ? Does anyone else remember the Ovaltineys ? Which is the character who is talked about a lot but never appears ? Could it be twin sister Lulu ? The ancient Sister Montezuma, confined by old age to the school tuck shop ? Brother Cadmium, sleuth monk ? Mrs Fenrir, the lupine dinner lady [a nod to this summer's Ragnarok] ? Or Scarcity Muttford, flapper and fascist ?
And who filched St Finnigan's elbow, the sacred relic with miraculous powers ?

The cast of five cope magnificently with the convoluted plot, changing costumes in a trice, providing instrumental accompaniment to the songs. Samuel Martin, as Billy and Sister Judith, even has a protracted fight with himself at the play's climax.
Greg Wagland, Eastern Angles Christmas favourite, has a ball as a sinister Rear Admiral, Cardinal Pecorino on his trusty Lambrusco, and school bully Lydia Bumolé. Oh, and Mr Cowell the music teacher.
Such celebrity name-checks are a running gag – Sister Usain Bolt [Suffolk lass Alice Mottram, impressively playing grotesques as well as schoolgirls] is the school's PE mistress, and all sorts of famous gels are dotted through the assembly hall.
Newcomer Joe Leat is excellent as an Irish Reverend Mother and Mr Facsimile the shifty Latin Master, and Alicia, our plucky heroine aged 15¾ is played by Francesca Gosling with a winning mix of feistiness and foolishness.

This catholic school for girls is a hot-bed of crime; this ripping yarn is a potent blend of Daisy Pulls It Off and Father Ted. There are tasty treats a-plenty along the way – the School Goose [is that a euphemism ?] and the cuddly moles, the hectic chase, the secret roulette table, the sea monster, the bearded bust of the saint, the stationery envy and the wrestling nuns.
And those wonderfully off-the-wall songs - “I'll be there to bully you”, “Isn't it grand” with fiddle and penny whistle, and the romantic “Alicia”, sax, violin and chorus of goose and moles.

It's all a wizard way to enjoy some festive fun; gold stars for silliness all round !

I'd probably give 5 stars but it doesn't quite attain the sublime moments of some past productions I remember. The palm trees for instance, or climbing the stairs.