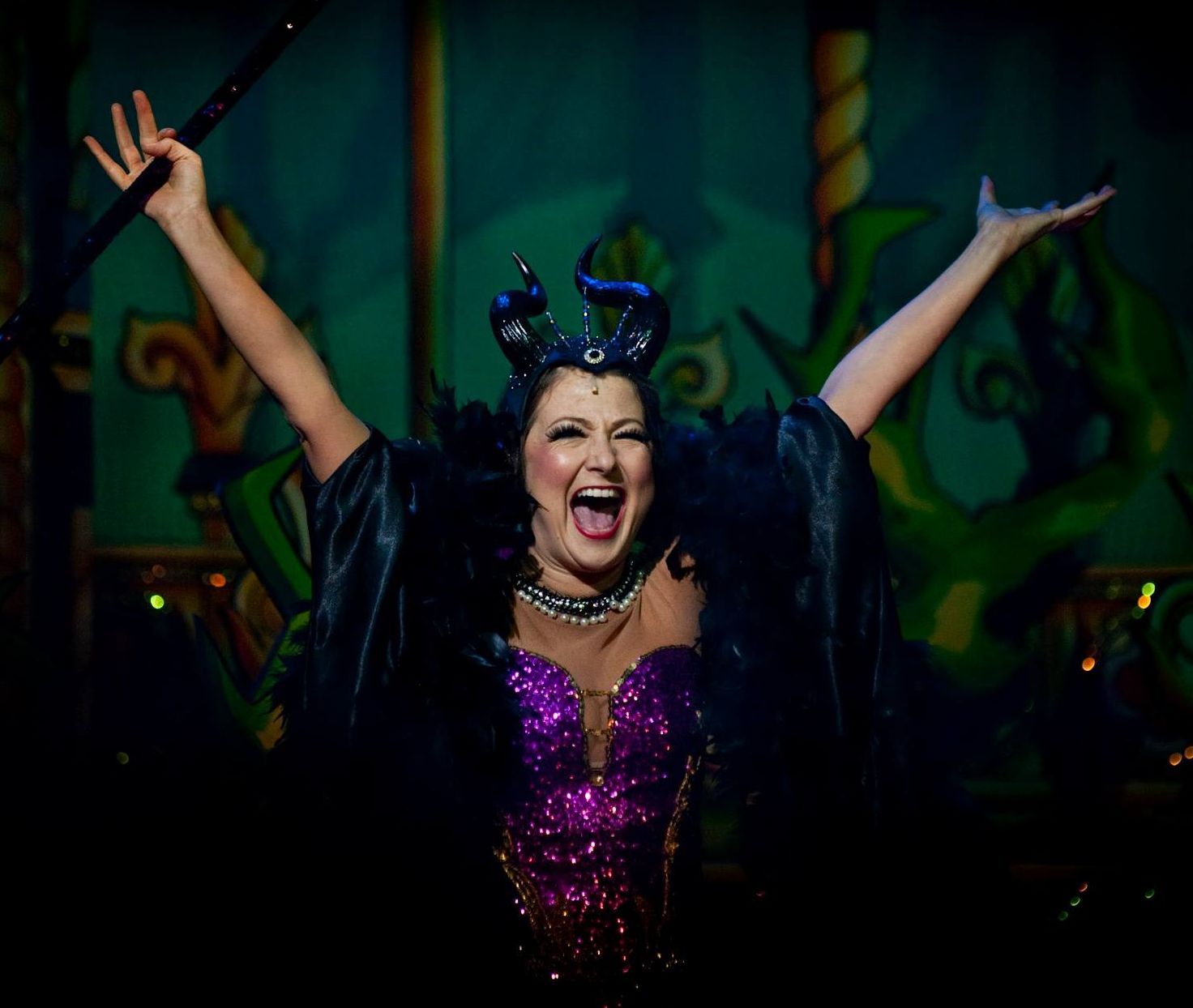 SLEEPING BEAUTY
Cut to the Chase at the Queen's Theatre, Hornchurch
01.12.2014


No end of fun in Hullabaloonia, the setting for this year's spectacular Sleeping Beauty.

Nicholas Pegg's script sticks close to tradition, the jokes and routines are familiar friends, but it's all done with such style and energy that everyone, from the tiniest to the most jaded, is royally entertained.

As we've come to expect, the show is visually stunning - everything designed by Mark Walters: the palace and the title gauze glitter like an illuminated manuscript – the sparkling colours echoed in the glowing swords and flashing fans in the stalls. The frocks, too, are outstanding: not just Nelly's outrageous creations – a nursemaid's titfer, a rampant squirrel, Gaga mirrorballs – but the fairies' wings and the king's uniform. Even the excellent children's chorus get several changes, including toadstool sprites and purple for the wedding walkdown.

The set includes a pneumatic red dragon, a lovely revolving turret for the spindle scene, and a forest of thorns ingeniously sprouting from nowhere. The bedroom scene, complete with moose, ghost, candlesticks and chamberpots, is a triumph of physical gags, carefully orchestrated for maximum comic effect.

The cast, directed by Matt Devitt, bring enthusiasm, and occasional in-jokes, to the familiar story. Rachel Dawson makes a charming young Aurora; Thomas Sutcliffe is her [elegantly dressed] humble kitchen boy Clutterbuck, a dashing, thigh-slapping hero with dimples and a Colgate smile. Their love is thwarted by her dad, King Ethelbert the Unsteady – a fussy, flatulent Fred Broom.
Only fitting that most of the hard work – warming the audience, dusting off old gags – should fall to Sam Pay's Silly Billy, a superbly likeable pantomime performance. And Claire Storey's Carabosse, a cynical American with a touch of Joan Crawford, makes an excellent foil for Megan Leigh Mason's pretty, vivacious Primrose.
Simon Jessop's Dame is bold and brash – much fun is had at the expense of Brad in row D - “hours of humiliation” for him, the climax his conducting of the audience in this year's Panto Song – Meghan Trainor's All About That Bass.

All the other music is fresh from the pen of MD Carol Sloman; this year's vocal gems include a quest anthem to end Act One, Fire in My Shoes for Tom, and a great duet Let's Make Sweet Music for the King and the Dame.

Like the music, the costumes and the set are all made in house. That's what makes the Queen's seasonal offering stand out; it's the Cut to the Chase company letting their hair down over Christmas, in a show that is entirely created on site. A local show, for a loyal audience, but with production values unmatched on the region's repertory stages.