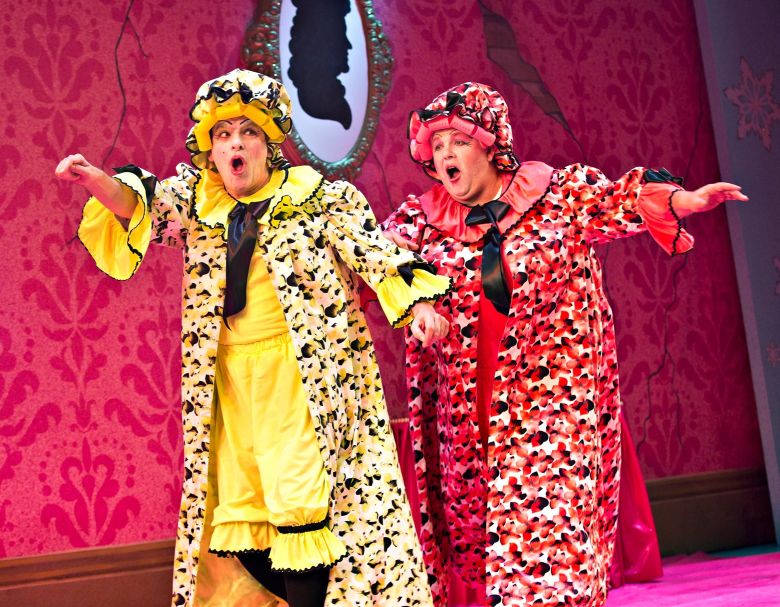 CINDERELLA
Made in Colchester at the Mercury Theatre
08.12.2014

The Mercury panto manifesto promises laughs for all ages, audience participation and much more. It could have added a fairytale made in Colchester: the tableau curtain has Jumbo, the Castle and the Italianate campanile of the Town Hall in silhouette, and the script, adapted by Fine Time Fontayne from a version done for the Lyric Hammersmith, includes loads of local references: Buttons from Brightlingsea, Dandini the Dedham Dandy, Fairy Fingringhoe.
And the names are echoed in the auditorium, with primary schools from Finchingfield, Tollesbury, Tendring packing the seats.
This Cinderella is refreshingly traditional in its approach - “you shall go to the ball!” - but with witty bits slipped in: “hemlock and fizz, no cherry” is the Wicked Stepmother's tipple, and Celine Dion's song becomes All By Mice Elf …
The playlist is mostly familiar, but with some unexpected treats and some original music by MD Richard Reeday. I liked the Sondheimlich “Unexpected” for Cinderella and her Prince, and Her Head Tucked Underneath Her Arm for the ghost routine – nicely done, this, with a twist at the end.
A great cast who know the panto ropes. Familiar faces back in harness this year are Dale Superville working his socks off as Buttons, and Ignatius Anthony and Tim Freeman as the deliciously immature D'Arcy sisters – the three of them showing their expertise in a messy routine involving indistinguishable slap and soup.
Sarah Moss is unusually convincing as Cinders, both in her skivvy's rags and in her beautiful ball-gown. Her Prince, Simon Pontin, looked the part, too, and kept doggedly in character even in numbers like The Best Song Ever.
Dandini is played, Essex-style, by Laura Curnick, who is also the Fairy Godmother, and Basienka Blake gives a memorable Evilla, a sexily sadistic stepmother with “a hornet's nest where her heart should be”, superb vocal characterization and a ballgown to rival Princess Crystal's.
There's a junior chorus – no cute tots here, but assured, talented young performers – who play mice, guests and debs.
The all-important transformation lacks impact, perhaps, though the ballet and the paper horse are effective.
Daniel Buckroyd's production maintains a brisk pace, never over-doing the routines, always looking for a chance for a throwaway gag for the grown-ups amongst the slapstick and the shouting.
And Juliet Shillingford's designs are elegantly simple – a massive dungeon kitchen with its smoky stove, and a ballroom dominated by a strikingly ornate clock.

Email ThisBlogThis!Share to TwitterShare to FacebookShare to Pinterest
Labels: cinderella, colchester mercury, made in colchester