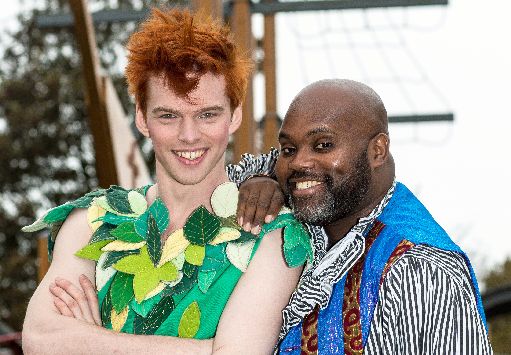 One From The Heart at the Civic Theatre Chelmsford

The Third Writtle Brownies loved every minute; I've rarely heard such a unanimously noisy audience as the one which greeted this Peter Pan, directed for One From The Heart by Nik Ashton.
Not really a panto – no cross-dressing [even Peter is a boy these days] and no wedding for the walkdown. But a cracking Christmas show nonetheless, with the most successful moments those that were most traditional: the three gorillas in the ghost routine, the Twelve Days nonsense song, the polystyrene rocks that put an end to the evil Hook.
Raucously lively performances from a hardworking cast: Jonathan Stewart as Hook and [briefly] Mr Darling, Katie Brennan doubling as Mrs Darling and a remarkably sassy Tinkerbell, Samuel Parker as a boyband Peter Pan. Competing for the audience's favours were Kerris Peeling's Eliza, aka Tiger Lily and the Cabin Boy, and Neal Wright's larger-than-life Smee, the erstwhile Lost Boy who longs to be a pop star …
There's excellent work from the chorus [students at Laine Theatre Arts] – Hook's cissy crew, and his saucy lovelies – with neat choreography to a string of chart hits. And from the children, Lost Boys, John and Michael – two teams of local talent.
And of course flying through the nursery window, and the dying Tink saved by the power of faith …

Another Christmas family show from One From The Heart for Chelmsford's Civic. This time writer Simon Aylin turns to Barrie's timeless Peter Pan, popular on stage since 1904.
His lively new version, dumbed down a little for us “TOWIE rabble”, still has most of the familiar elements: flying, the Lost Boys, Nana the canine nursemaid.

The scene curtain has impressive projections of pirate ship and storm, and the designs are colourful: the nursery looks like something out of a toy catalogue; pop-up storybooks are referenced too. The rooftop gauze for the flight to Neverland is especially effective.

There's no Dame here, of course, but no fewer than three characters compete for the audience's noisy affections: Eliza [Kerris Peeling] acts as narrator, and also tags along with the action as parlourmaid, Tiger Lily and a cabin boy. Tinker Bell, played by Katie Brennan as a very feisty, thoroughly modern young woman. And cuddly Smee [Neal Wright], definitely favourite with the kids, with his naughty words and his X-Factor moment.
Samuel Parker makes a dashing Peter, with his shock of red hair, fancy footwork and stylish swordplay; Eve Crawford plays his Wendy, spitefully dismissed as “frumpy” by Tink.
Jonathan Stewart is Mr Darling and Hook, both slightly under-played, given the frenetic tone of Nik Ashton's production.
There's a small chorus, all students from Laine Theatre Arts, and two teams of local children, who give good value in the Lost Boys number, and also play John and Michael.
The musical numbers, slickly staged but not always relevant or clearly sung, are pop hits in the main, a notable exception being Dream A Little Dream, beautifully styled by Mrs Darling [Brennan again] as a lullaby to her children in the nursery [MD is Tom Curran].
There's a good deal of padding in the two hour show, including crew training with mops, and an unexplained football sequence. The parts that work best are those which are firmly within the panto tradition: the crazy Twelve Days of Christmas [“Five Toilet Rolls”] with water pistols but alas no sweets tossed into the stalls, the birthday shout-out and the gorilla chase around the auditorium.
The capacity crowd were vocal in their appreciation of this fast and furious bit of seasonal fun, from the “Hello Chelmsford” warm-up to the party mix curtain call.

Email ThisBlogThis!Share to TwitterShare to FacebookShare to Pinterest
Labels: Civic Theatre, one from the heart, peter pan