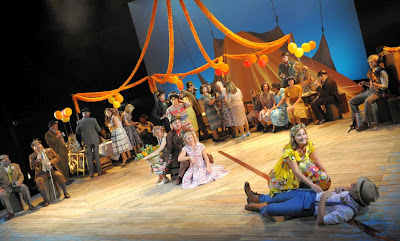 A WINTER'S TALE
at the Mercury Theatre Colchester
26.09.11
for The Public Reviews

Shakespeare's late romance is a tricky play. It plunges deep into tragedy before finding happiness and redemption. It has a bear, a living statue and several clowns. Set in Sicily and Bohemia, it manages to reference both the oracle at Delphi and the Russian Empire.
Sue Lefton's elegant and imaginative production manages most of the mood swings with aplomb, and keeps its audience gripped by the very human drama at the heart of the piece.
The setting is simple – reminiscent of “modern” Shakespeare stagings of the mid 20th century. The “watery star” - red and threatening – hangs over a staircase tower, with a white piano beneath. The Sicilian court is dressed in well-cut grey; Bohemia is rough-spun and autumnal.
The two childhood friends who are separated by jealousy are clearly still “lads” at heart, until the unfounded suspicions of Leontes [a not particularly noble Tim Treslove, who nonetheless movingly suggested the anguish of his tortured mind] drive a wedge between him and the charmer Polixines [Ignatius Anthony]. Impressive work from David Tarkenter as a wide-boy cheap-jack Autolycus, and Ben Livingstone [also the musical director] as the Old Shepherd who raises the abandoned princess as his own. But it was the women who shone here, especially in the speaking of the verse. Nadia Morgan was a defiant Hermione; her animated statue was beautifully done. And Shuna Snow made a superb Paulina, an “audacious lady” indeed, in her businesslike tailored suit.
The fresh-faced lovers were nicely brought to life by Emily Woodward and Fred Lancaster. The Community actors, now a welcome fixture in the Mercury's season, filled the stage for the rustic revels, and, sober-suited, heard the dénouement proclaimed.
The production was full of memorable, meaningful ideas. The schoolboy's spinning-top, the “fermata” for the first stirring of the green-eyed monster, the oracle brollies, the shadow bear, and Perdita's party dress echoing the swaddling clothes of sixteen summers before.
A clearly told Winter's Tale, set in a magical fairy-tale landscape of balloons and billowing silk, umbrellas and Mackintosh chairs.
production photograph: Robert Day
this piece first appeared on The Public Reviews