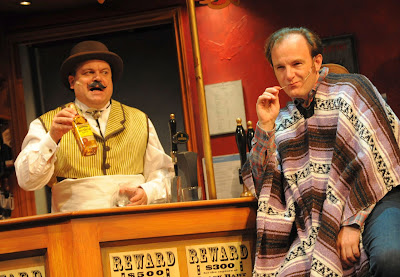 RHINESTONE MONDAYS
at the Mercury Theatre Colchester
01.09.11
for The Public Reviews

As the Rhinestone Cowboy Glen Campbell prepares a UK farewell tour, country music is as popular as ever this side of the Pond. A far-flung outpost of this fan base lurks in the dingy basement of the Warbleswick Sports and Social Club, where Monday night is Line Dancing night.
That's the premise for Joe Graham's slight piece, directed by Phil Willmott, which aims to please lovers of the music and the regular theatre-going crowd.
More than a touch of Girls' Night Out, though a sad lack of boots and hats in the audience. And rarely has the label “karaoke musical” seemed more apposite, with the cast stepping up to sing to backing tracks in the lilac spotlight.
After a front cloth warm-up, we meet the gallery of clichéd sitcom characters – little old lady with flatulence and false teeth, loud Welsh gay tap-dancer, you get the picture – whose fights and feuds, loves and losses, form the flimsy plot on which to hang the songs.
Some interesting performance pedigrees at work. Faye Tozer, from Steps, is the dance teacher who finally finds happiness with dance-phobic, tongue-tied Tom [Anthony Topham]. Also from Steps, Ian H Watkins, giving a strong performance as Duncan the treacherous tap-dancer who engineers the happy ending. One of the best vocals of the show [Willie Nelson's Crazy], not surprisingly, was from Lyn Paul, whose first big hit with the New Seekers was an incredible forty years ago. Less convinced by her Cougar character, however. Lots of comedy potential in the pivotal role of Ronald, who likes to be called Clint, and takes everything a bit too seriously. But Phil Pritchard failed to make it more than a figure of fun, I felt. The best performance by far, combining just a little send-up with real acting and superb comic timing, was Shaun Williamson's Del Boy barman. His rendition of Orbison's Blue Bayou was priceless, a taste of how wryly entertaining this show could have been …
Not much actual line-dancing in evidence until the coda, when we were given a nice 42nd Street curtain line of stepping feet, and a chance to see how much of Achy Breaky Heart we could dance in the narrow aisles of the Mercury.
This is a World Première for Colchester: the show and its stars set off on an ambitious tour, bringing line-dancing comedy to Wales, Ireland and Scotland.
production photograph: Robert Day
this piece first appeared on The Public Reviews