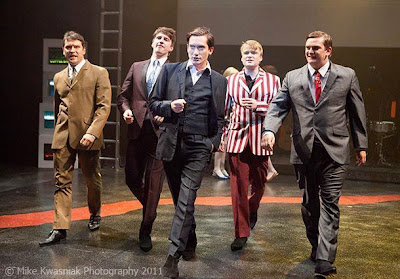 TWENTIETH CENTURY BOY
at the New Wolsey Theatre Ipswich
13.09.11
for The Public Reviews

Rolan Bolan, “sad-eyed son of a legendary superstar” flies to London in search of the father he never knew. Along the way he meets a colourful parade of family, friends, producers and predators, and finds closure of a sort on a pilgrimage to the sycamore shrine.
Gary Lloyd's strikingly staged production successfully recreates the experience, visual and musical, of Marc Bolan in performance. Patrick Connellan's set has 36 tv screens, a scarlet diagonal river, two stairs and a box at the back for the band. There are some superb back projection sequences – the psychedelic wooing of June in her VW, for instance – and imaginative stagings, such as the Cosmic Dancer duet. Among the more memorable moments were the head-banging Desdemona, with the blood and sparks only on the screen, alas, and the last encore, with the fans cheering on their feet as if we were still in the 70s.
George Maguire's Bolan was an amazing reincarnation. Not quite as beautiful as the original, maybe, but he caught the elfin mischief and the preening bullshitter to perfection. And of course was totally convincing musically as well.
He was strongly supported by a talented team of actor-musicians. It was a while before Craig Storrod, as Rolan, was given anything interesting to do, but he proved a pleasing singer, moving in the final pages. Gloria Jones, Rolan's mother, the driver in the fatal car crash, who finds her son's search cathartic, too, was powerfully played by Donna Hines. June Child – Mrs Bolan – was Jenna Lee-James, and there was an excellent Helen Shapiro cameo from impressive newcomer Katie Bernstein.
Despite the nostalgic touches – the Test Card, flying ducks, Davy Crockett hat – the book did not match the musical tribute. The actors were often left mouthing clichés that got us no nearer to understanding their lives and their loss. They brought considerably versatility to a gallery of stereotypes [all real people from the era] – Actor Laddie, camp impresario, gobby roadie – which were often amusing without being very plausible. John Peel, alas, was merely a disembodied voice.
The show worked best for me when the music was integrated into the narrative – London Boys, say, or the wonderful Dandy in the Underworld. Elsewhere, like many a juke-box musical before it, it simply recreates the T Rex experience for the fans. And they were certainly not short-changed: two LPs worth from the catalogue, all performed with zest and Seventies stylishness.
If you liked Bolan, you'll love this. But did we say of Amadeus, a couple of years after Bolan's tragically early demise, if you like Mozart, you'll love this ?