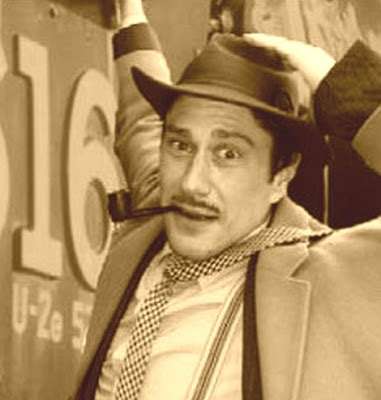 THE 39 STEPS
Early Doors Productions at the Cramphorn Theatre
10.09.11

Patrick Barlow's ingenious stage version of the Hitchcock movie is established on the London tourist theatre scene. And now Early Doors in exile bring the whole mad-cap experience to the Cramphorn, selling out the three night run.

I think poor old Buchan would have liked Lionel Bishop's Hannay. Every inch the gentleman, a considerate, thoughtful secret agent, his political speech very much from the heart. Though he could send the story up with the best of them when he needed to – a glance, a pause, a double take. Wonderful stuff.

He had it easy, of course, just the one role. The other 150 characters were shared between Amy Clayton, who also directed, and the two Clowns, Justin Cartledge and Martin Harris. Lots of fun and physicality from them all, even if they were more comfortable in some characters than others – the Scots accents seemed to pose particular challenges.

Even with the technical limitations of this tiny space, we were treated to some splendid effects and routines – the lamp-post, the toy train, the hats trick.

It must be hard to achieve the required manic pace, energy and attack with only three nights in front of a live audience; firmer direction, and more music to cover scene changes and create atmosphere, might have lifted this enjoyable spoof from the ridiculous into the sublime.