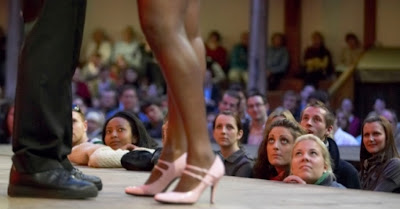 “We are so shit ...” chorus the cast of Chris Hannan's new play, a less than impressive endpiece to an otherwise successful Globe season.
They're being hard on themselves; there's some pointless shouting, but in the main they do their best with a meandering, unfocused look at celebrity, the new divine.
I would particularly single out Will Manning as New God, and Richard Clews as a “mental” down-and-out.
Some felicitous poetical lines, and great music from the band [King Porter Stomp], but not enough to transcend a script that never really settles on a style or a theme.